The crypto markets have undoubtedly been in an uptrend over the past several weeks that has allowed Bitcoin to set fresh year-to-date highs in the mid-$8,000 region, and despite facing several pieces of somewhat bad news, BTC has continued to surge higher.

Analysts now believe that Bitcoin is likely to surge into the $9,000 region in the near-future, which may be sparked as soon as BTC surges past its current resistance level around $8,200.

Over the past week, BTC has incurred some choppy trading that has caused it to trade between a wide range between roughly $7,000 and the lower-$8,000 region, with support existing at the former price and resistance at the latter.

Bitcoin’s upwards momentum that has allowed it to climb from yearly lows of just above $3,000 towards its current price levels have been overwhelmingly bullish, and has persisted in the face of several somewhat negative revelations, including the New York Attorney General’s accusations of fraud against Tether/Bitfinex, and yesterday’s delay of the VanEck/SolidX Bitcoin ETF application.

Currently, the next level of resistance that BTC must surge above exists around $8,200, and if this level is broken, the cryptocurrency may surge to fresh year-to-date highs around $9,300.

UB, a popular crypto analyst, discussed this possibility in a recent tweet, explaining that he believes BTC will surge towards $9,500 in the near future. 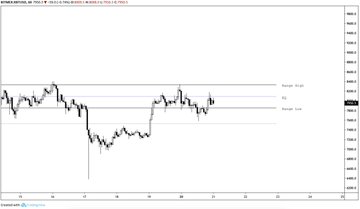 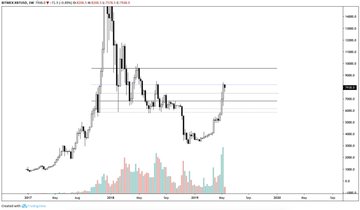 I’d like to see the EQ reclaimed as support ASAP.

Analyst: A Break Above Lower-$9,000 Region Would Lead to Significantly Further Gains for BTC

It now appears that the lower $9,000 region is Bitcoin’s monthly resistance level, which means that it will require a significant amount of buying pressure to be broken above.

Josh Rager, a popular crypto analyst on Twitter, discussed this in a recent tweet, explaining that a break above the aforementioned monthly resistance would provide a significant amount of strength for Bitcoin’s bulls.

“$BTC 1M Chart: Bitcoin breaking through multiple monthly horizontal resistances this month & it hasn’t looked back yet. A break above this level puts the next monthly resistance near $9200+ & weekly resistance at $9600. After these resistance areas break – watch out for bulls,” Rager noted.

After these resistance areas break – watch out for

As the week continues on and Bitcoin continues to struggle to gain its footing within the lower-$8,000 region, it is highly likely that traders and analysts alike will gain a better understanding of just how high BTC may surge in the coming weeks and months.

According to the company behind it, stablecoin USDT is not fully backed by fiat currency deposits. It was revealed today that the controversial crypto asset firm Tether…

Bitcoin and most altcoins have been incurring tremendous volatility as of late, which has been primarily driven by BTC’s extended period of consolidation in the…

The crypto industry is gearing up for an event-packed few months. From the resolution of the New York Attorney General’s injunction against Bitfinex and Tether to the final decisions…

Analysts Believe Bitcoin is Likely to Surge Past $9,000 in Near Future as Upwards Momentum Builds