Bitcoin and most altcoins have been incurring tremendous volatility as of late, which has been primarily driven by BTC’s extended period of consolidation in the lower five-figure price region, where it has been trading at for the past month.

Now, one prominent analyst is noting that many altcoins that have faced severe technical damage from their recent drop may experience a relief rally in the near-term, as long as Bitcoin is able to hold steady around its current price levels.

Bitcoin Faces Strong Selling Pressure, But Holds Above Support at $11,000

BTC’s ability to hold above the $11,000 level is certainly positive news for the cryptocurrency’s bulls, as it signals that there is some buying pressure around its current price levels that is preventing it from plummeting towards $10,000, which remains a key psychological price level that must be held above in the near term.

While looking at Bitcoin’s micro price action, it is important that the crypto continues holding above $11,100 during the day ahead, and bulls may regain their control if it surges past $12,500.

Josh Rager, a popular cryptocurrency analyst on Twitter, spoke about the aforementioned price levels in a recent tweet, noting that a break above $12,500 would flip his bias bullish.

“$BTC – 15Min Chart: Struggling to break above $11,760 with the decreasing volume setting up for more volatility (BBands squeezing on lower time frame). Any move and close below $11,138 would be bearish on LTF and for me to get absolutely bullish, I want price above $12,500,” he explained.

Struggling to break above $11,760 with the decreasing volume setting up for more volatility (BBands squeezing on lower time frame)

Although it remains unclear as to whether or not Bitcoin will continue consolidating around its current price levels, or if it will soon make a decisive move either up or down, one analyst does believe that many embattled altcoins will soon experience a relief rally.

Luke Martin, another popular cryptocurrency analyst on Twitter, spoke about this possibility in a recent tweet, referencing many altcoins that have faced severe technical damage after the recent market downturn.

“Alts have had a steady decline this week with the majority of them stringing together 4 red days in a row. Today almost all of them are crossing above daily open or up about 5%. If $BTC stays still increases chances that short-term relief for alts can have follow through,” he explained in a recent tweet. 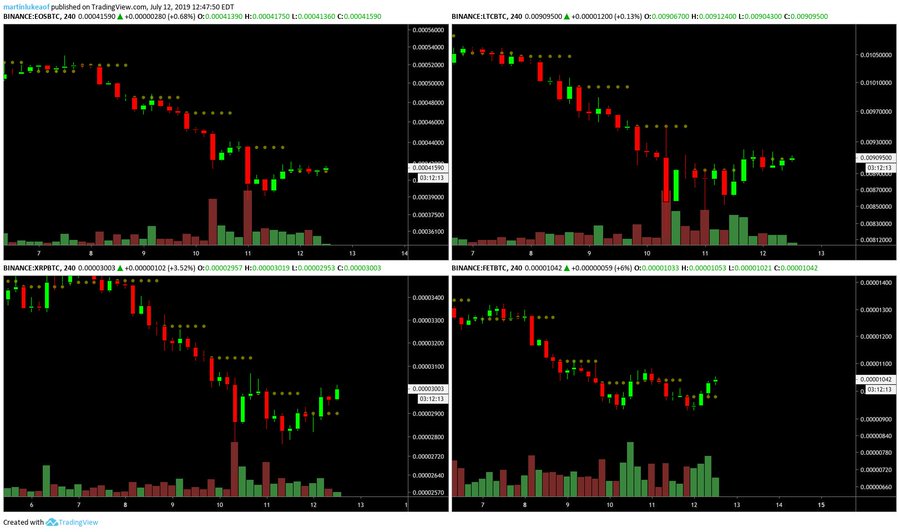 Alts have had a steady decline this week with the majority of them stringing together 4 red days in a row.

Today almost all of them are crossing above daily open or up about 5%.

If $BTC stays still increases chances that short term relief for alts can have follow through.

As the week drags on and the crypto markets continue to react to their recently incurred volatility, analysts and investors alike will hopefully soon garner better insight into where the markets are heading next.