According to the company behind it, stablecoin USDT is not fully backed by fiat currency deposits. It was revealed today that the controversial crypto asset firm Tether only holds around 74 percent of the total value of USDT’s current circulating supply.

Tether and the crypto exchange Bitfinex are currently defending allegations from the New York Attorney General’s office that the latter borrowed $600 million from Tether to stay afloat after the trading venue reportedly lost $850 million. The dramatic shortcomings are thought to be the result of Crypto Capital, a Panama-based payments processor that Bitfinex used, having assets frozen in various nations around the world.

USDT Not Backed 100%, But Did Anyone Think That it Was?

An affidavit filed by Stuart Hoeger, the general counsel at both Tether and Bitfinex, has today claimed that the stablecoin crypto asset USDT is only backed by around $2.1 billion. This falls short of the $2.8 billion worth of USDT currently in circulation. The document states:

“As of the date [April 30] I am signing this affidavit, Tether has cash and cash equivalents (short term securities) on hand totaling approximately $2.1 billion, representing approximately 74 percent of the current outstanding tethers.”

He also details that a credit agreement between Tether and Bitfinex did indeed exist and was in place “for the protection of the virtual currency market.”

According to a memorandum by Tether’s defence lawyer, Zoe Phillip of Morgan Lewis, there is no need for each USDT token to even be backed by a dollar:

“According to the Attorney General, the line of credit needed to be frozen because it improperly impairs the reserves Tether would use for redemptions. The Attorney General appears to believe that Tether must hold $1 in cash fiat currency for every dollar of tether. These allegations are wrong on multiple levels.”

Hoegner’s affidavit seems to support this by highlighting that the stance of the company had officially changed with regards the 100 percent backing of USDT in recent months. Given that this was widely reported at the time, it seems a wonder firstly that anyone was even continuing to use USDT when numerous other stablecoins now exist and secondly, why the news of the New York Attorney General’s allegations against the two companies should drop the price in the way it did last week.

The CEO of social trading platform eToro, Yoni Assia, took to Twitter to opine about the revelation’s likely impact on crypto prices. He mused on the likelihood of a potential Bitcoin price pump if the news causes people exit USDT en masse. Ultimately, however, he admits that the shady goings on between Tether and Bitfinex will be negative for crypto. Although, he is sparse on specific details.

Are the news supposed to pump or dump BTC ? Its bad news, but if $2B USDT get exchanged to BTC it actually increases its price… what a predicament .
Tether Lawyer Admits Stablecoin Now 74% Backed by Cash and Equivalents https://www.coindesk.com/tether-lawyer-confirms-stablecoin-74-percent-backed-by-cash-and-equivalents … via @CoinDesk

Tether’s general counsel acknowledges that USDT is only 74% backed by cash and equivalents in a new affidavit.

Meanwhile, independent crypto researcher and analyst Hasu seemed to hint that the debacle would inevitably invite greater regulatory scrutiny to exchanges, which could in turn damage the utility of Bitcoin and other crypto assets:

I’m not surprised that bitcoiners have a soft spot for Tether/BFX.

Lightly-regulated fiat on/off ramps are part of bitcoin’s extended security model. Bitcoin is less useful when every way in and out is US-regulated. They accept that this increases the risk of getting cheated.

Anyone who rationalizes this shit is a god damn hypocrite. It’s going against the exact values that bitcoin was meant to uphold. And it’s funny since most of these people defending Bitfinex usually turn out to be shareholders

Cardano (ADA) founder and Ethereum (ETH) co-founder Charles Hoskinson used the news to draw attention to the fact that banks routinely operate on far lower reserves than those admitted by Tether today. This sentiment was also echoed by RT’s Max Keiser and many others.

Well at least tether has more backing than my bank account https://www.coindesk.com/tether-lawyer-confirms-stablecoin-74-percent-backed-by-cash-and-equivalents …

Tether’s general counsel acknowledges that USDT is only 74% backed by cash and equivalents in a new affidavit.

Ultimately, such a comparison is largely redundant, however, as any form of fractional reserve backing USDT the anti-thesis of what many people in crypto signed up for when they got involved with the industry. Larry Cermak, an analyst with The Block, stated that comparisons between the percentage reserves held by Tether and those of the average bank ultimately ignore the shady goings on of the crypto exchange Bitfinex. He went as far as to state that both companies are guilty of pathological lies: 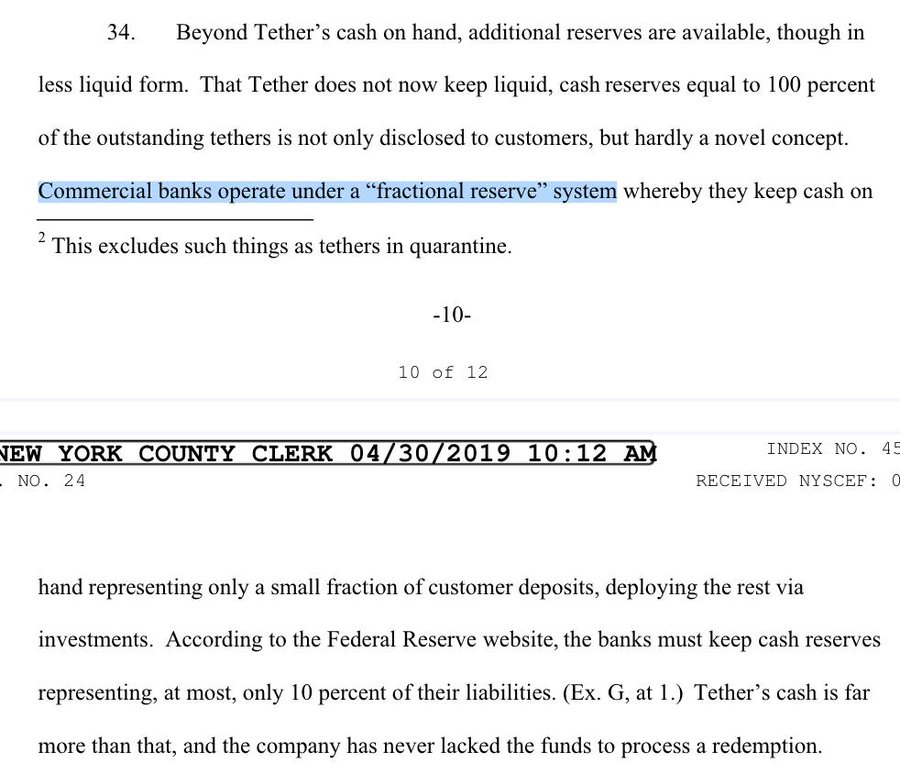 The Tether/Bitfinex saga is far from over yet. NewsBTC will continue to bring you coverage of the legal hearings as they develop.