A U.S. Congressman may have just called for the ban of cryptocurrencies, but Bitcoin (BTC) hasn’t cared one teeny-tiny bit. In the past 24 hours, BTC has rallied by 3%, perpetuating a rally that has been going on for over a month now.

While some cynics have argued that Bitcoin is rallying too fast and too high for its own good, some are sure that BTC’s technical set-up still is looking entirely bullish.

David Puell of Adaptive Capital, who last week postulated that BTC was trading in a clearly bullish broadening ascending wedge, explains that the cryptocurrency is literally going short-term parabolic. In fact, Puell defines Bitcoin’s recent price action as “vertical,” accentuating that bulls are truly in control.

He adds that with the number of short positions on both Bitfinex and BitMEX continuing to rally to new year-to-date highs, the potential for a short squeeze has boomed. Puell notes that if BTC hits $6,400, as his parabolic model foresees, “a perfect blow-off top” could form, whereas shorts are squeezed, and BTC rallies in a 2017-esque fashion.

$BTC: Price is not only parabolic, but vertical now.

Shorts are still far from getting fully squeezed.

Blue: pullback targets after this potential climactic top from who knows where.

Others would agree. Financial Survivalism, who once revealed a model that saw BTC falling to $800in the current cycle, explains that Bitcoin’s 10-minute chart is currently shaping up to be a short-term Hyperwave. As this form of technical analysis predicts, BTC could see a vertical rally to the high $6,000s, and then may see a near-vertical drop back to the $5,000s. 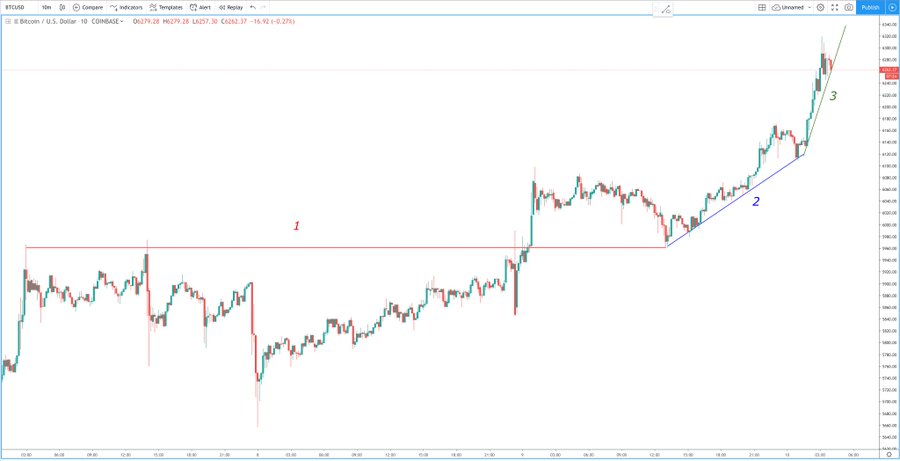 The 10 minute $BTC chart looks like it is forming a #Hyperwave fractal.

Not only is Bitcoin looking hot in the short-term, but in the long-term too. As Fundstrat head of research, Tom Lee points out, Bitcoin has ostensibly rallied in the face of negative macroeconomic and political trends, cementing the idea that BTC is uncorrelated and likely in a “bull market.”

Lee explains that in a period during which political tensions are mounting, global equities may be trending lower, the VIX (volatility) index has seen a massive spike, and global yield curves are implying an impending recession, BTC has rallied, and moved above the ever-important $6,000 level. Nice.

In a period where:
—political tensions escalate between US and China,
—global equity markets fall sharply
—VIX largest spike in many months
—global yield curves flatten/invert#bitcoin has RISEN and >$6,000

Crypto showing its value as an uncorrelated asset.

Altseason Is No More

Although Bitcoin-centric cryptocurrency investors have been absolutely enamored with BTC’s recent uptick, altcoin holders likely aren’t all too pleased. Per data from Messari’s OnChainFX, dominance for the lead cryptocurrency has breached a jaw-dropping 62%, the highest this key statistic has read in months.

This is to be expected, especially considering that the industry’s startups and investors currently are rather focused on BTC, yet many have been caught aback by this move. Just over two weeks ago, Fundstrat’s resident Bitcoin bull opined that if history rhymes, altseason, which he defined as a period during which a large percentage of altcoins in the “liquid universe” rally by over 200% in a short period of time, could be just around the corner.

Per Lee’s explanation, which cites data from Bloomberg, CoinMarketCap, and his own firm, a drop in the rolling 90-day correlation between the two subsets has preceded three altseasons — March 2016, early-2017, and late-2017/early-2018. With this statistic then falling, the commentator then explained that an altseason, which could see cryptocurrencies rallied ten-fold was on the horizon.

Altseason, as we now know, did not turn out how Fundstrat expected it. So, if altseason is no more, what’s next for non-Bitcoin digital assets?

Per a number of analysts, Ethereum, XRP, and its brethren are about to be slammed even further, for their BTC pairs anyway. Survivalism explains that Bitcoin dominance just broke out of a bull flag. If textbook technical trends are followed, as Survivalism expects, dominance for the lead cryptocurrency could hit 77% in the coming months. Wow. 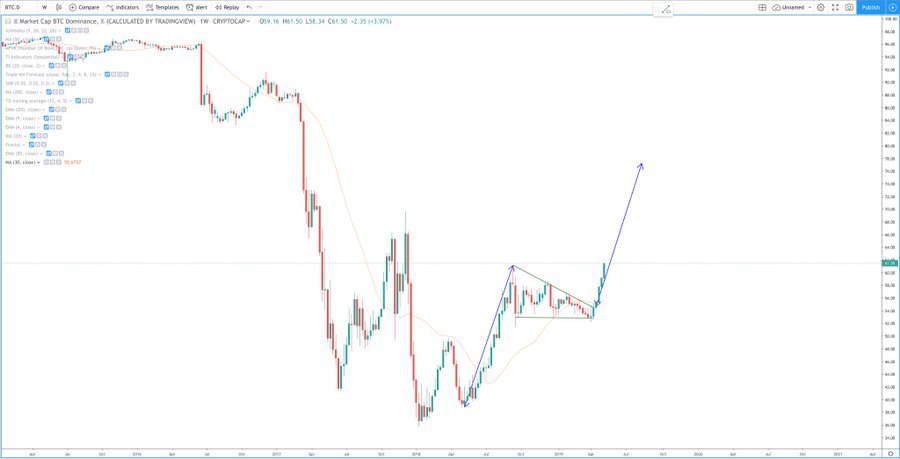 Bull flag has confirmed in the #Bitcoin market cap dominance. Target is 77%.

It is important to note that this prediction isn’t baseless. Chris Burniske, a partner at Placeholder that produces amazing threads on cryptoeconomics, explains that movements in dominance can be confined to a simple cycle.

Burniske explains that when Bitcoin rallies, a “majority of ‘alts’ drop,” specifically due to the fact that BTC has and continues to act as the primary liquidity provider for cryptocurrency. This didn’t occur in 2017’s rally, but in the short-term, it appears that this theme materializes time and time again. Thus, the question remains — if Bitcoin continues to rally, could we really see a market where 77% of its capitalization is BTC?

Here’s the cycle: $BTC rallies hard, majority of “alts” drop as BTC is the main liquidity provider to #crypto (right now) and no one wants to sell BTC.

Value of “alts” in *BTC terms* then drops until whales choose to cycle into “alts.” Then…

On a day where everything is bleeding red except Bitcoin, let us be reminded that Bitcoin has continued to outperform every coin in the top 10 over the last month.

On average, the top 10 coins by market cap are down more than 30% against Bitcoin. 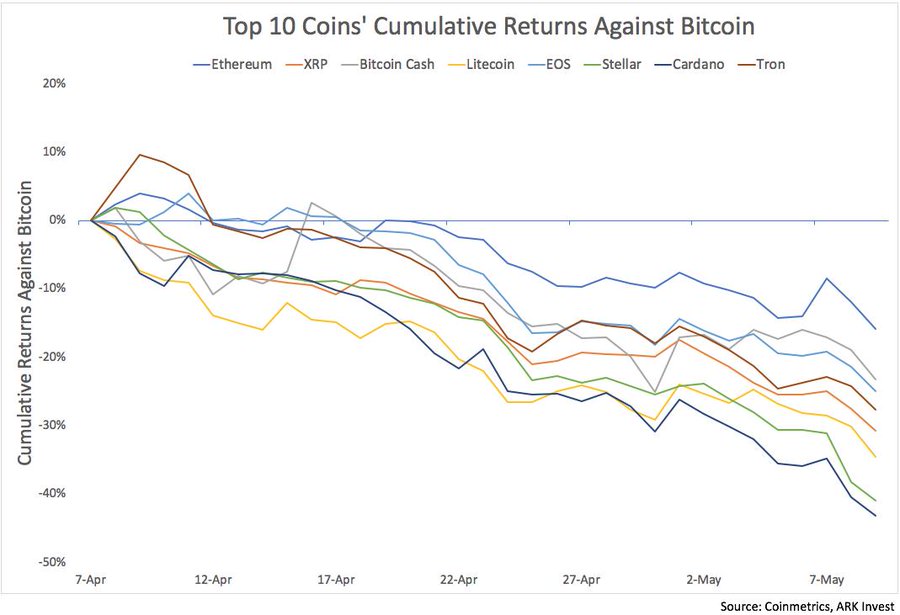 Bitcoin Blips Past $6,300 In Jaw-Dropping Move: What’s Next?