Ledger, the world’s leading cryptocurrency hardware company have announced the addition of several new crypto-assets to its service.

Announcing the addition via their twitter, Ledger will see the addition of PoA, Icon, Vechain WanChain, Ontology, Kowala, particl and RSK: 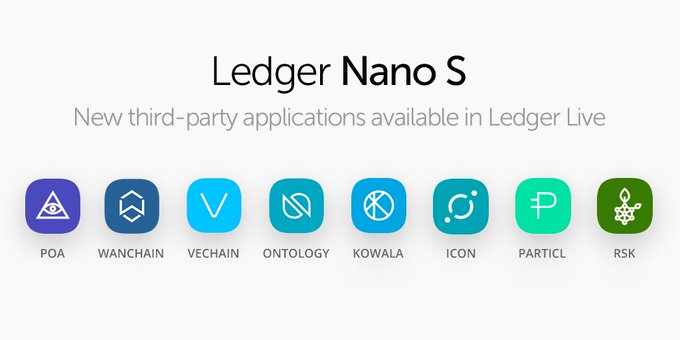 Interestingly, the tweet also included a link to the company’s roadmap on Trello, where visitors can see in real time the updates to the company’s planned release schedule, information about Ledger Live features, and how to give feedback on the platform.

You need the latest version of the Ledger Live desktop app to see these eight new apps for the Nano S. Below, is a screenshot from the Mac version of Ledger Live that shows some of the newly added apps:

With the new additons available on the new Ledger Live platform, a desktop software program designed to help users manage crypto-assets, these latest additions come at a time when the company is seeing enormous growth.

Launched in 2014 following the enormous Mt. Gox hack, the founders were inspired to offer more secure solutions for crypto holders to store their assets.

Since then, the company has seen sales rocket. Selling over a million hardware wallets in 2017 the firm completed its Series B round funding in January, raising $75 million, and has reportedly been valued at up to $1 billion.

Looking for investment from “industrial partners who will also sign commercial contracts with the crypto start-up,” reports have emerged that the crypto-start-up has attracted interest from some very high-profile players including Samsung, Siemens and Google’s venture arm GV.