Yesterday’s crypto market carnage saw over $20 billion in USD value wiped out from the total crypto market capitalization. The dump affected nearly all crypto assets, including Ethereum, EOS, and Litecoin – even Bitcoin, which has maintained support despite altcoins collapsing around it.

But new data shows that it may have been altcoins collapsing that dragged down Bitcoin. A side-by-side comparison of the price action in select altcoins shows that Ethereum, EOS, and Litecoin led the dump, causing overall sell pressure across the crypto space to cause the first-ever crypto asset to follow suit.

At the close of 2018, following a year-long bear market, Bitcoin and altcoins began to rebound, with certain altcoins like Litecoin leading the way. The rally lasted until about Q2 2019, then, Bitcoin and altcoins diverged sharply, with altcoins continuing their selloff and BTC proceeding upon its parabolic rally.

Eventually, Bitcoin’s rally topped out, and the leading crypto asset by market cap has struggled to regain the momentum it once had.

Yesterday, Bitcoin price finally fell through support at $10,000 that most crypto analysts and traders were expecting to hold. But $10,000 didn’t hold as most thought it would, and its price fell over $600 to $9,500 where it is currently trading and attempting to find support.

But it wasn’t Bitcoin that led the dump. A new side-by-side comparison chart next to Ethereum, EOS, and Litecoin, shows that the three altcoins led Bitcoin in crashing.

Pretty interesting observation on yesterday’s dump from a friend of mine.

EOS dumped super hard before Bitcoin even moved. ETH, LTC and other alts followed suit shortly after, before the big dumping started on BTC.

Draw your own conclusions. 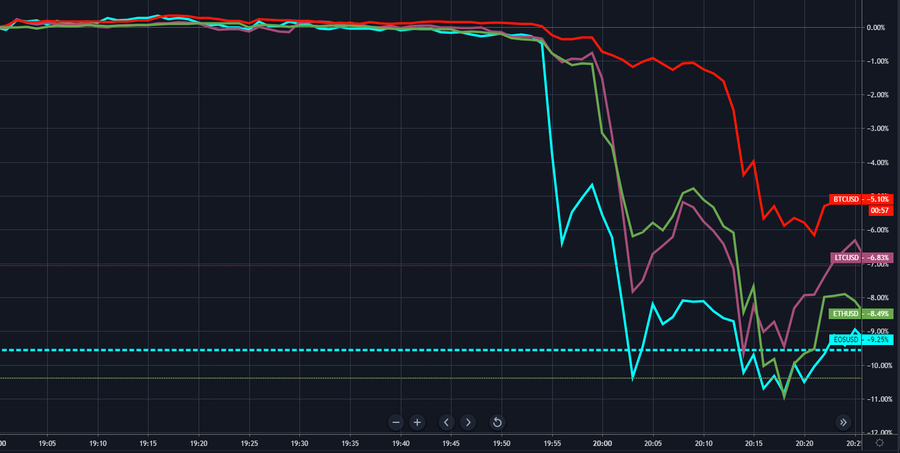 The dump started with EOS leading the way with a massive dump. Then like dominoes, Ethereum and Litecoin fell sharply next, followed later by Bitcoin. The time difference between when EOS started dumping and when BTC finally feel through support is roughly 20-30 minutes.

It’s not clear if the timing is simply coincidence, or if the selling pressure and negative sentiment in altcoins finally caught up with the leading crypto asset, and caused its collapse.

If Bitcoin Followed Alt Breakdown, Price Would Be Roughly $7.6K, Is that the Next Target?

While Bitcoin has been on what most believe to be the beginning of its next bull run, money has been leaving the altcoin market in droves. Some of it has gone into BTC, helping to fuel its parabolic rise, while the rest is likely cashed out, with crypto investors finally fed up with extensive losses.

Money is exiting alts. If bitcoin were breaking down at the same rate, it would be around 7.6k now.

This chart isn’t useful for predicting bitcoin targets, but it’s very useful for assessing the state of the market imo.

Had Bitcoin fell at a similar rate as alts, Bitcoin price would be roughly $7,600 by now. That number is widely considered by crypto analysts as one of the key support zones it could fall to next. Another is at $8,500, where a CME Futures gap has been left unfilled for months now.

With altcoins acting as a strong indicator of what Bitcoin does next, continued capitulation could cause investors to turn bearish on Bitcoin, and if that occurs, the early bull run may be nothing more than yet another bear market rally that’s been swatted down once again.