On Wednesday, Barry Silbert, an early Bitcoin investor and founder of many crypto-related firms, recently took to CNBC’s ‘Fast Money’ segment to express his opinions on why Bitcoin recently bottomed out. 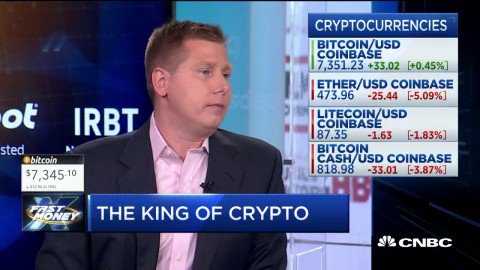 The king of #crypto @barrysilbert says #bitcoin has found its bottom and the only way is up.

Firstly, the so-called ‘crypto king’, noted that there was a lot of institutional ‘dry powder’, or highly liquid assets, sitting on the sidelines, waiting to make a good entry into the crypto market. This statement implies that Silbert, who runs a crypto-focused investment fund, saw an influx in institutional capital leading up to the most recent run-up.

As reported by NewsBTC previously, a recent report from Greyscale Investments, which is a subsidiary of Barry Silbert’s Digital Currency Group, confirms an increase in institutional interest.  According to this new report, Greyscale raised $250 million in the first half of 2018, with 56% of that investment coming from institutional investors.

July 16: CEO of BlackRock says there is ZERO institutional interest in crypto

Secondly, the ‘crypto king’ stated that the bears have run out of Bitcoin to sell, also pointing out that technical signals are starting to turn positive. Silbert’s comment about technical signals stays in line with what Tom Lee of Fundstrat had to say on the day prior, with Lee noting:

“Over the weekend, there were quite a lot of folks who were talking about TA and the potential formation of either an inverse head and shoulders or a Wyckoff buy off. So it sounds like the technicals were really starting to become more favorable.”

Last but not least, he brought attention to the recent comments about cryptocurrencies made by on-lookers from legacy markets, specifically the negative sentiment held by the Fed’s chairman, Howard Marks, and Ken Griffin. He specified that the fact that Bitcoin didn’t see any substantial price decreases in the face of negative sentiment is an extremely bullish sign.

Silbert: I’ve Been Through Two 80% Drops Before And It’s All The Same

Mellisa Lee, one of the primary hosts of the segment, seeming confused about Silbert’s previous comment, went on to ask him if he sees a regulatory criticism as a bad sign. Oddly enough, Silbert actually sees this as just another part of the cycle, noting that this is the area where you can make a positive return on your investment. He elaborated, stating:

“So I started buying Bitcoin in 2012 when the price was ten dollars and I’ve gone through now two 80 percent corrections, and this was a 65 percent correction. It’s the same old criticisms… Its just (that) they’re (critics) uninformed because everybody on this desk, anyone who spends the time to look into what is this asset class, why is it important, why does it have so much potential comes out of it being a believer.”

You can insinuate from his statement that he sees Bitcoin reaching higher levels of adoption after retail and institutional investors get correctly educated about this industry.

Silbert, who is the head of the crypto-focused Digital Currency Group venture fund, went on to reveal his firm’s holdings in crypto assets on-air.

Quoting directly from DCG’s balance sheet, the Bitcoin investor conveyed that his firm’s crypto portfolio consisted of 50% of Bitcoin, 25% of Ethereum Classic, 15% of ZCash, 5% of Decentraland and a new 5% holding of ZenCash.

Explaining why the crypto assets his firm held were not too diversified, Silbert noted that a majority of altcoins are going to zero, adamantly stating:

This sentiment about the rest of the market was expected of the early Bitcoin investor, as he has historically focused his attention on the world’s foremost cryptocurrency, or “digital gold” as some like to call it. Dr. Matthew McBrady is the head of strategy at crypto hedge fund Strix Leviathan, where he advises on the firm’s trading and investment strategies and…

Crypto King Silbert: Bitcoin at Bottom, Only Upwards From Here