Historical Precursor To Altseason Is Showing Its Face

Fundstrat’s prominent head of research, Tom Lee, recently took to Twitter to remark that one of the “pre-conditions” for historical altcoin rallies is coming to life in the current cycle. This precursor, for those unaware, is a drop in the correlation between the crypto asset class at large and Bitcoin itself.

Per Lee’s chart, which cites data from Bloomberg, CoinMarketCap, and his own firm, a drop in the rolling 90-day correlation between the two subsets has preceded three altseasons — Mar 2016, early-2017, and late-2017/early-2018. An altseason, as defined by Fundstrat, is when a large percentage of altcoins in the “liquid universe” rally by over 200% in a short period of time. 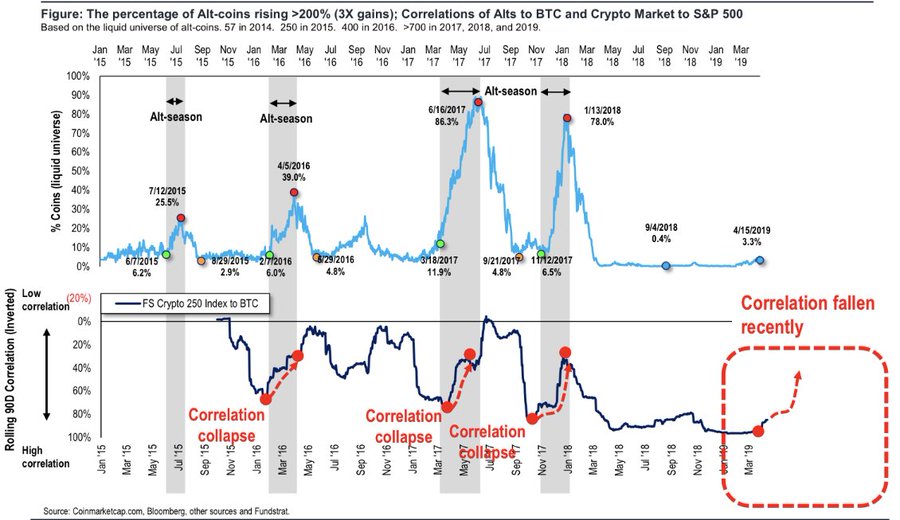 1/ Since 2015, one of the “pre-conditions” for the start of alt-season is a drop in the correlation between Alts and $BTC

With preliminary indicators predicting a further collapse in the correlation between digital assets and BTC, an altseason might already be well underway. If you take a brief gander at CoinMarketCap or other analytics providers, this would seemingly be the case.

Binance Coin (BNB) recently surpassed its all-time high, in a brutal bear market no less, as Litecoin has rallied by over 200% since December’s low. Cardano, Ethereum, Tezos, and Basic Attention Token are among other prominent cryptocurrencies that have also seen jaw-dropping gains in the past 90 days. But, this surge might just be the tip of the iceberg.

As Lee explains, historical altseasons averaged gains of 1,100%. He adds that Fundstrat expects for the next rally in cryptocurrencies to “deliver returns similar to the 2017/2018 cycles.”

Bitcoin Likely To Rally Alongside Other Crypto Assets

While Lee is hinting that the fabled altseason is finally here, this isn’t to say that he is bearish on Bitcoin. Far from, in fact.

In a recent CoinTelegraph Youtube segment, the analyst claimed that the Bitcoin Misery Index, a measure meant to determine the average sentiment of a cryptocurrency holder, reached 89 — the highest the signal has ever read in a bear market. In the eyes of Lee, this confirms that BTC is out of a bear market, as x > 67 readings only came during bull markets. He adds that as Bitcoin has held above its 200-day moving average for an extended period, he is fairly convinced that bears are finally biting the dust.