At yesterday’s 2019 CryptoCompare Digital Asset Summit in London, Thomas Lee, Co-Founder, Managing Partner, and the Head of Research at independent research boutique Fundstrat Global Advisors, gave an electrifying talk, during which he explained why “full blown” FOMO (fear of missing out) would only start once the Bitcoin (BTC) price goes above $10,000, and said that if this happens, the BTC price would be “very likely” to reach $40,000 within five months.

Lee’s keynote speech was titled “Crypto: 2019 Signs of Life”. Below, we look at a few key takeways from Lee’s presentation.

Many People Who Bought Bitcoin in Early 2018 Are ‘Bitter’

Anyone who bought Bitcoin near the “top” of the market and witnessed the almost 85% crash in the price of Bitcoin in 2018 could perhaps be forgiven for thinking that perhaps legendary U.S. investor Warren Buffett was right about calling Bitcoin “probably rat poison squared”. Also, Lee noted that institutional investors “generally believe anything down 80% form their highs is a ‘broken thesis’ and never look back.”

On 8 February, Fundstrat published its “2019 Crypto Outlook” report. One page of this report looked at the “trends of factors affecting crypto” and showed why that almost everything that had acted a “headwind” in 2018 was turning into a “tailwind” in 2019. In fact, Lee referred to this page in a tweet he sent out on that day: 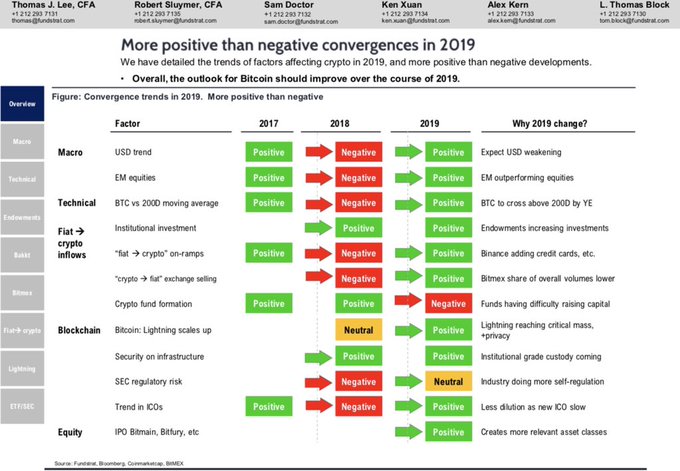 CRYPTO: we see 9 incremental improvements in the landscape that ultimately support higher prices.

13 Signs That Crypto Winter Is Over

During this part of the talk, Lee referred to a figure from another Fundstrat report. This listed 13 events that had occurred between November 2018 and May 2019. Fundstrat believes that these events are signs that crypto winter is over. In fact, he tweeted about this back on May 19: 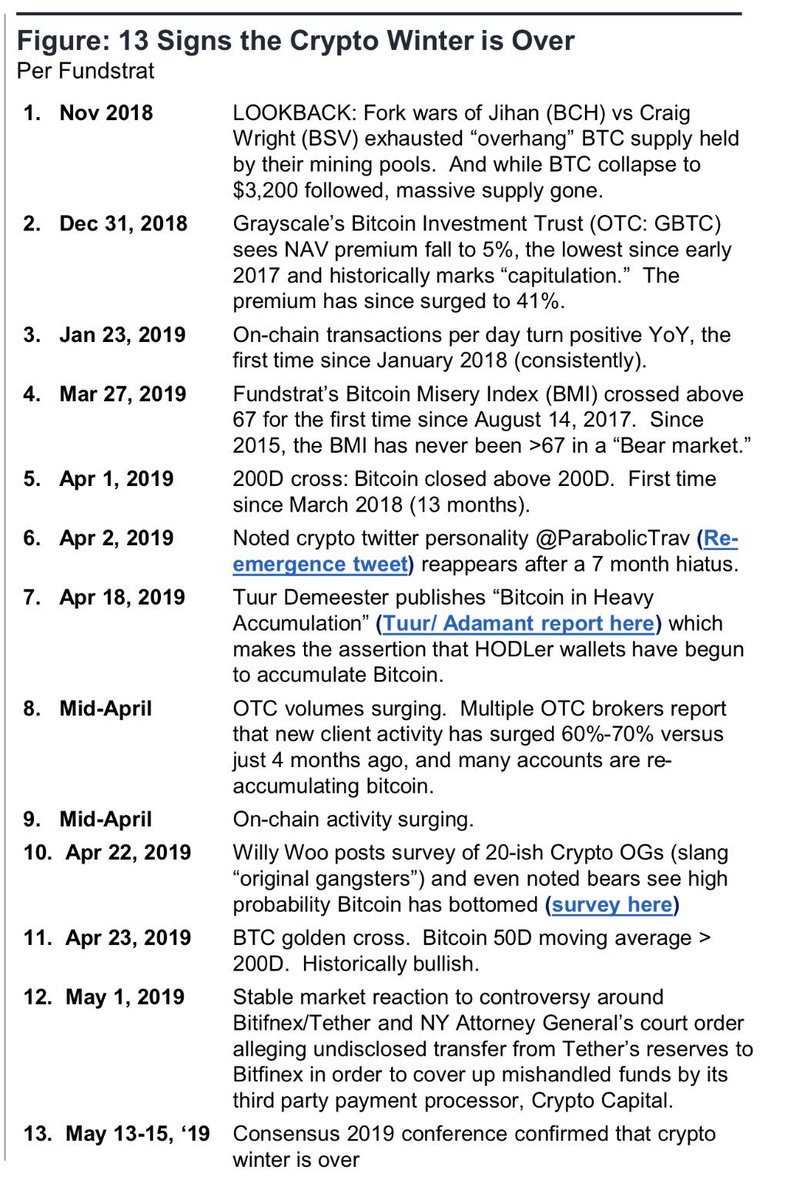 After a disturbing pullback to ~$6,200, #Bitcoin back >$8,000 further cementing positive trend intact.

As we said a few weeks ago, Consensus 2019 @coindesk was to prove whether crypto winter is over…

According to Fundstrat, their analysis of the Bitcoin price shows that the Bitcoin spot price being above the 200-day SMA is a bullish indicator, and that in such a case, we can expect a forward return over the next six months of at least 193%. On the other hand, if the BTC price is below the 200-day SMA, we can expect only a forward return of at least 10% over the same six-month period.

Here, Lee reiterated what he had said to Adam Samson, Global Head of fastFT at the Financial Times on May 29: that full-blown FOMO would probably only start once the price of Bitcoin goes over $10,000.

Actually the point of the chart is to say “real FOMO” probably starts when #bitcoin exceeds $10,000 as that is a price level only seen 3% of all days…

Looking back, that price was a level that indeed triggered FOMO

However, what he had not said back then was how high the Bitcoin price could go if it did break the $10,000 resistance level. Well, yesterday, Lee explained what “full blown” FOMO really meant. More specifically, he made his most bullish Bitcoin price prediction yet: if Bitcoin manages to cross this $10,000 threshold, it was “very likely” for the BTC price to go as high as $40,000 within five months.

In an interview with Binance CFO Wei Zhou earlier this month—on episode 5 of the Binance podcast—Lee explained his reasoning:

Furthermore, during our post-keynote interview with Lee, he confirmed that for his $40,000 price prediction for Bitcoin to come true, it was not necessary for Bitcoin to go over $10,000 very quickly (say, during the next few days/weeks) and that the key requirement was just that the Bitcoin price goes over $10K.

Tom Lee: If Bitcoin Price Exceeds $10K, It Could Go to $40K Within Five Months