Stellar’s validator nodes “trust” the SDF nodes. Because of that, there was a failure, and the system couldn’t reach consensus for two hours on May-15. At the moment, XLM is under pressure but up 18.8 percent in the last day.

In the words of Yorke Rhodes, development around blockchain feels like it is back to 1995. Then, the internet had little interest to the average consumer. Fast forward, 19 years later, and Web-1 is indispensable. Everyone can be a publisher in this decentralized web where communication is seamless.

Now, it’s blockchain’s turn, and as the world readies for “investment,” Stellar is laying down the infrastructure. The native currency, XLM, fulfills the same functions as XRP, a coin that is embroiled in controversies, struggling to clear the centralization and security tag. However, it is XLM that is under investor’s radar.

Aside from influential partners in IBM, Coinbase is airdropping the coin increasing demand for the asset. At the same time, XLM did draw some momentum from the “Coinbase effect” following its listing at the American exchange.

All the same, XLM did crumble for some hours today following a freeze in the network. For two hours on May-15, the platform couldn’t reach consensus meaning no transactions were validated, because, one Redditor said “most validators on the network, if not all of them, trust SDF nodes. So that means that SDF validators are needed for the network to reach consensus.” In his explanation, Jed McCaleb, co-founder of Stellar, said:

“Over the last months, we have worked to get people to not depend on the SDF nodes. As of maybe a month or so ago the SDF nodes could safely go down and the network would continue. However, this also means that the network can halt even if the SDF nodes are still running. Unfortunately, this is what happened.” 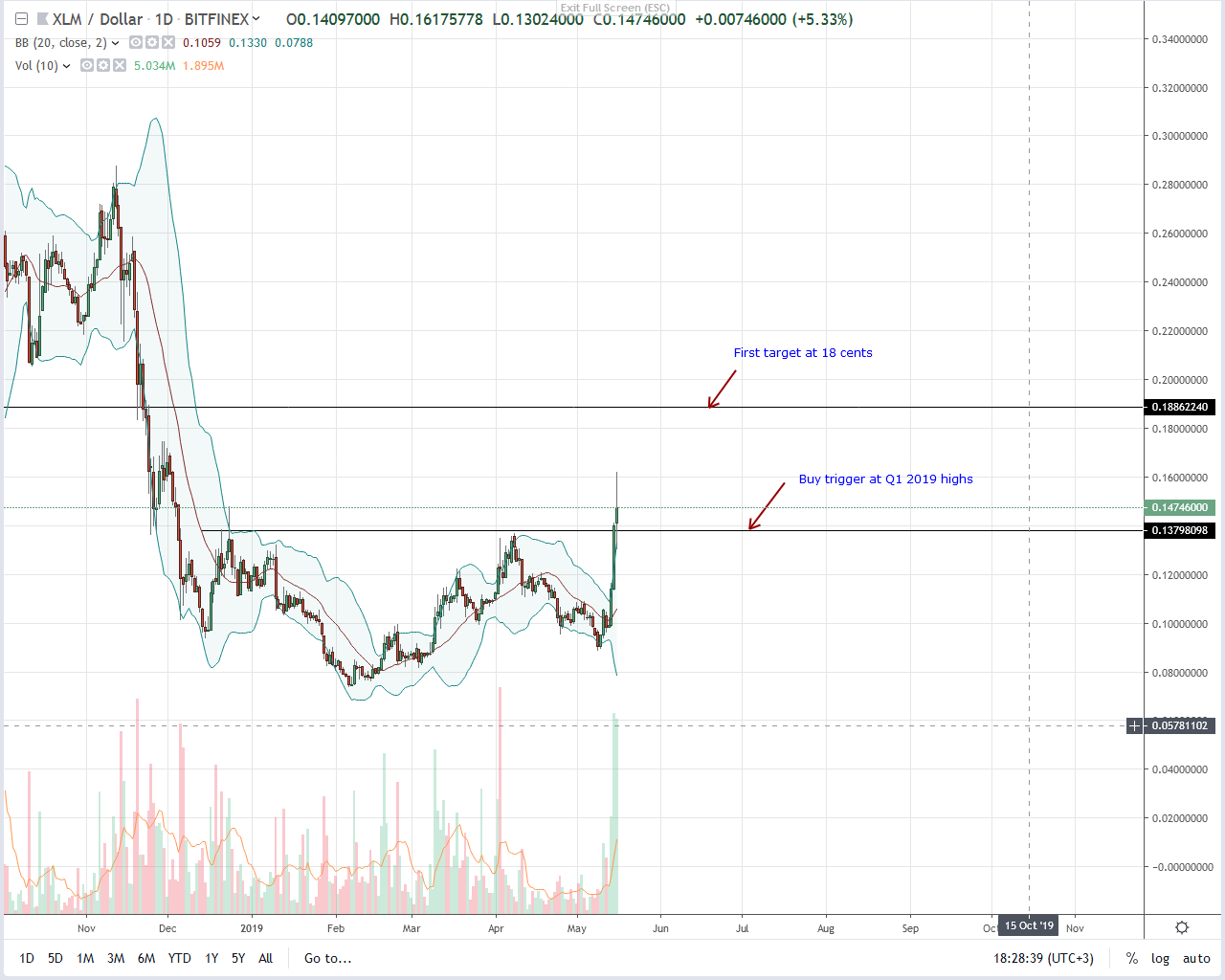 With a pin-bar and zero-support, Stellar (XLM) is melting. Even so, it is up 18.8 percent in the last 24 hours and a massive 55.6 percent from last week’s close. At the back of this is a humongous bull bar marking the entry of buyers, thrusting above a 5-month resistance level at 13 cents.

Because of yesterday’s event and volumes behind the breakout bar, every low dip should be a buying opportunity with the first target at 18 cents. That will be a retest of Q2 2018 lows. Nonetheless, any blast above 20 cents could see XLM rally to 30 cents.

On the flip side, should today’s overvaluation spur a sell-off below 11 cents and 8 cents with high participation, our bullish outlook would be null.

From the chart, prices were mostly ranging with caps at 13 cents and floors at 8 cents. After May 15th’s bull bar — 5 million versus 1 million, any bar cementing buyers above 13 cents ought to be with equally high volumes above 5 million.