A giant Bitcoin logo has been projected onto the Swiss National Bank in the centre of Zurich. A photograph of the building appeared on Twitter earlier today.

The projection is thought to be the work of the bank’s new neighbours, Trust Square. They recently moved in across the road from the Swiss National Bank. Trust Square is a blockchain hub that was launched earlier this month.

The centre is focused on researching and developing blockchain applications. Within the facility, there is room for 200 workstations for use by startups and investors researching the implications and possible applications of the revolutionary new technology.

The tweet featuring the image was posted by Johannes Gees at 8:17AM today. The picture depicts a giant orange Bitcoin logo, measuring at least 15 foot, along with the caption:

“Ist that a #bitcoin on the @snb Schweizerische Nationalbank? Trustsquare rules” 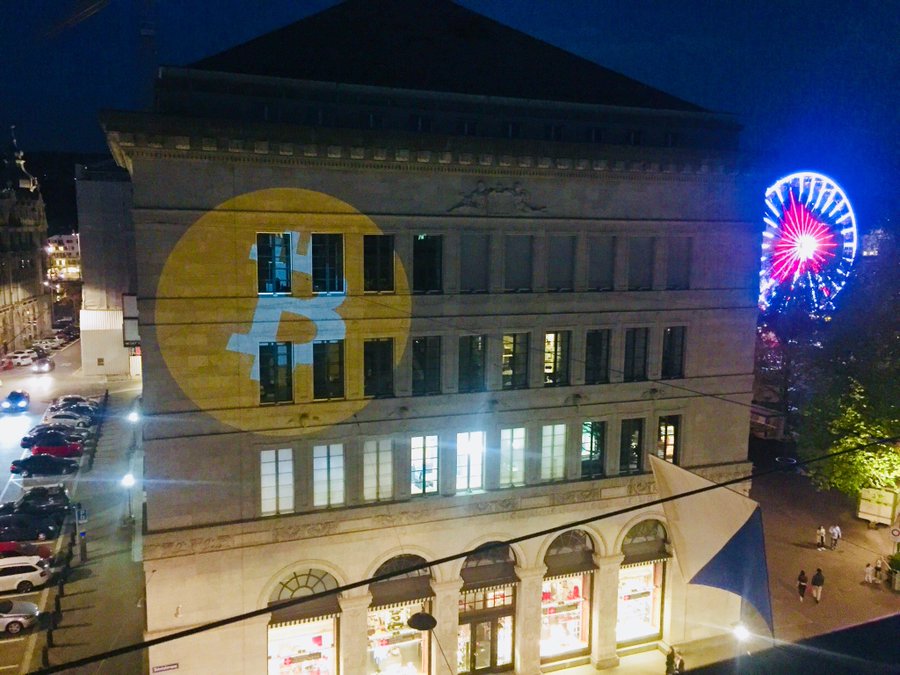 Ist that a #bitcoin on the @snb Schweizerische Nationalbank? Trustsquare rules!

The publicity stunt is another sign that Switzerland is emerging as a leader in blockchain and cryptocurrency technology. The nation is already home to several digital currency-focused startups. The Swiss town of Zug has even been dubbed ‘crypto valley.’ Over 200 companies exploring the technological innovation are based in the small mountain community.

Forcing Bitcoin into the public eye in such a way is obviously great for the leading digital currency and the rest of cryptocurrency by extension. Such publicity stunts help to change the perception of Bitcoin. For years now, digital currency has been wrongfully associated with cyber crime and nothing more.

Being on display so publicly should help shake the connection between dark web drug dealings and digital currency. Unfortunately, despite criminal acts accounting for less than 1% of Bitcoin usage, many members of the public still think that it is only a tool for illegal purposes. This impression is largely down to the fact that the first time many heard of Bitcoin it was in connection with the Silk Road marketplace – an eBay-like service offering illicit items in exchange for Bitcoin.

A similar publicity stunt was recently unveiled in another European hub of cryptocurrency activity. A monument depicting the Bitcoin logo was built by artists Aleksander Frančeškin and Selman Čorović in the Slovenian city of Kranj this March. It was reportedly paid for by the world’s oldest cryptocurrency exchange Bitstamp. Bitstamp was founded in Slovenia but now has its head offices in Luxembourg. The monument sits proudly at the centre of a roundabout at the heart of the city.

Meanwhile in Paris, a mural depicting the rise of Bitcoin out of the death of fiat currency was completed by French street artist Ludo. These public displays of Bitcoin should help speed the process of cryptocurrency adoption amongst those who are still sceptical of the technology.