Cybersecurity pioneer and crypto fanatic John McAfee has recently revealed he and his team are “preparing a legal complaint” against popular cryptocurrency exchange HitBTC and its service providers, as the exchange failed to respond to him when he reached out.

HITBTC has not responded to our requests. We are preparing a legal complaint against HITBTCs service provider and against HITBTC. If you have an issue with HITBTC, then please send details to:

According to the cybersecurity expert, HitBTC hasn’t done anything to help people “access the only free healthcare in the world,” and is responsible for costing people in the cryptocurrency community money and is liable for the “death of untold people.”

Notably HitBTC replied to McAfee justifying that its withdrawal fees were high because it pays the Ethereum required to send transactions through the network, instead of forcing users to have ETH on their accounts to pay the fees. To cover the ETH fees, HitBTC claims to raise withdrawal fees in the token being withdrawn.

It notes that McAfee’s input would be welcomed while in search for a solution, and asks the cybersecurity pioneer if he has an “algorithmic solution” that could help out. One of the solutions the exchange proposed involves actively monitor token prices so it won’t overcharge users.

Replying to HitBTC, McAfee threatened to fund a $20 million lawsuit that could bring the company down.

And if this is not redressed to the max – and i mean to the fucking max. I will donate $20 million to a class action lawsuit that, I promise, will bring you down. 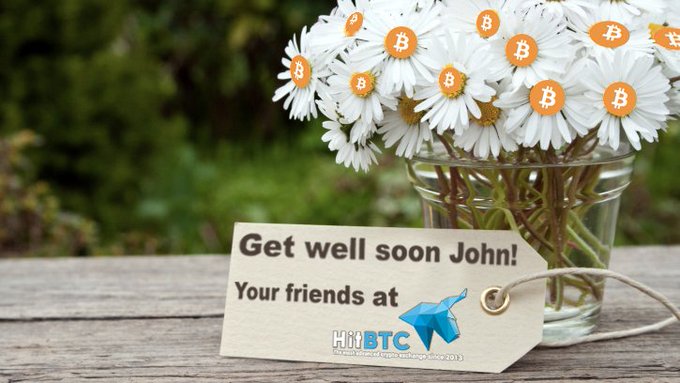 HitBTC is notably an incredibly controversial company in the community, as various users complain that it is selectively scamming community members, by locking the funds of only a few which are then seen as outliers. A Reddit user recently alleged the company was holding his funds hostage, despite his submission of proof of ID.

The exchange recently barred Japanese users from its platform, as it is set to launch a licensed subsidiary in the country later this year.