While Bitcoin (BTC) dominance is up and Bitcoin transaction fees are down, the crypto market is seeing an overall downturn by press time, Wednesday, Feb. 21, with all of the top 30 coins on CoinMarketCap in the red.

Bitcoin dominance, or BTC’s market cap as a share of the total market cap for all cryptocurrencies, is at a monthly highly today of around 39.4 percent, corresponding with the recent sharp drop in Bitcoin transaction fees.

A year ago today, BTC had about 86 percent market dominance, a figure that has been falling on average ever since, despite its short rise up to 66 percent in early December. 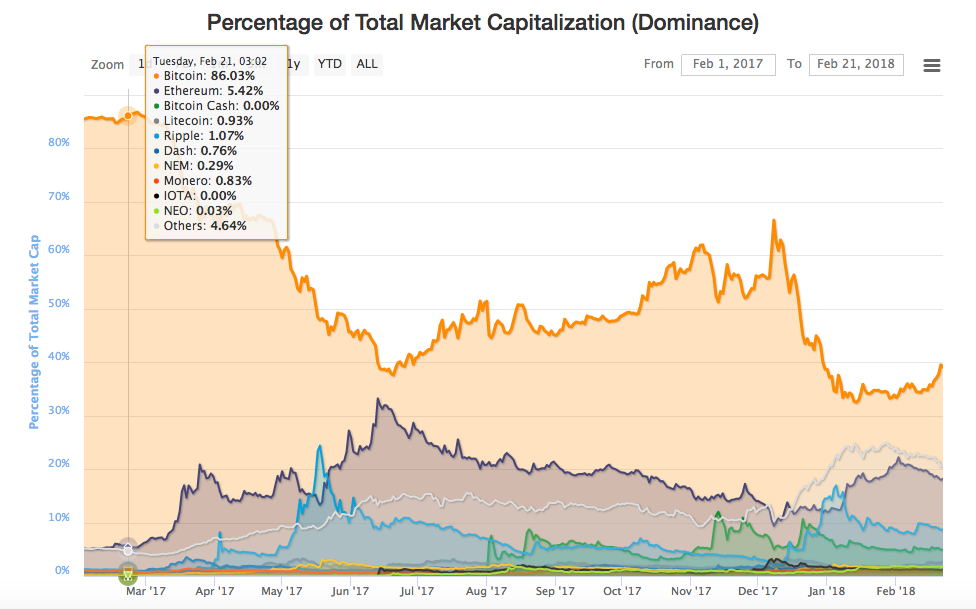 Bitcoin transaction fees had seen all-time highs in January 2018, rising to about $37 for a fee that would have your transaction mined fastest, on the next mined block.

However, Bitcoin’s last transaction fee as recorded by Blockchair was $0.36/kB at 3:11pm UTC, Feb. 21, a 6-month lows for the leading cryptocurrency.

Bitcoin Cash (BCH), a well-known Bitcoin hard fork that took place August 2017, has positioned itself as superior to Bitcoin in part because of having lower transaction fees than BTC. Bitcoin Cash’s last transaction fee recorded at by Blockchair at 3:28pm UTC is in fact slightly lower than Bitcoin at $0.22/kB. However, other transactions made this afternoon showed fees of as high as $0.91/kB.

Crypto investor and evangelist Roger Ver, arguably the most well-known and active proponent of BCH, tweeted last week about the benefits of BCH over BTC, calling Bitcoin, “slow, expensive to use, and unreliable for transactions.”

Twitter user UFoundMe commented on the tweet on Feb. 18 with an image capture showing the average fees of BCH and BTC converging:

BCH is what BTC used to be.
The current BTC is something I am not bullish on.
It is slow, expensive to use, and unreliable for transactions by the intentional design of current BTC supporters.

Bitcoin is currently trading at around $10,675, down about 9 percent over a 24-hour period by press time.

Bitcoin Cash is down a little more than 14 percent over a 24-hour period, trading around $1,302 by press time.

Support for the Bitcoin scalability upgrade Segregated Witness (SegWit), which is designed to make transaction fees slower and transactions times faster on the Bitcoin network, was added to the latest Bitcoin Core client version released on Feb. 15, 2018. SegWit support was also added to major exchange Bitfinex today, Feb. 21, and scheduled to be released on the exchange and wallet platform Coinbase by mid-next week.