The cryptocurrency markets experienced another dramatic crash yesterday, with almost two weeks’ worth of upside being completely undone within a matter of 12 hours. Just as Bitcoin was slowly working its way out of the $6,200 level to $7,400, it quickly crashed all the way back to a low of $6,250, taking Ethereum and the rest of the Altcoin market down with it.

There seems to be no end to the dramatic price irregularities that occur each week in crypto. From the perspective of a stock market investor or the SEC, it looks like we are truly operating in the Wild West, where overt acts of market manipulation are simply accepted as the norm.

Perhaps this is the image that the largest cryptocurrency holders (also known as ‘whales’) want the community to be branded with? After all, what better way to deter an ETF approval than to set off a series of price pump and dumps days before each upcoming ETF decision.

Let’s take the ProShares ETF decision on August 22nd as the first example. As we now know, this ETF was denied, along with another from Granite Shares, and five leveraged and inverse ETFs from Direxion.

Early that same day, Bitcoin put on a spectacular show by rallying $350 dollars (from $6,463 to $6,816) within 5 just minutes, before subsequently dumping by the same amount just a few hours later. 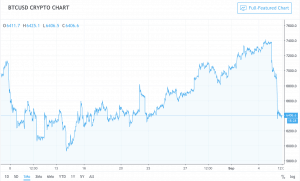 The sudden price spike occurred at the same time as the scheduled maintenance of leveraged trading platform Bitmex, with experts stating that it offered traders the right set of circumstances for arbitrage.

“It is a silly short-term trade. Buy when maintenance starts. Sell when it ends.”

And just as you might have guessed, the SEC cited concerns about fraud and manipulation of Bitcoin markets as the key reasons for rejecting that round of ETFs.

Next, we have the Bitfinex service disruption incident over the weekend of September 1st. Just as the CME Bitcoin futures contracts were due to expire, Bitfinex, the 5th largest cryptocurrency exchange, halted operations, citing ‘server connectivity issues’.

The timing was a little too convenient, as the CME futures expiring led to a spike in Bitcoin prices, followed by an even bigger spike once Bitfinex came back online. Was it possible that employees behind the exchange were simply loading up on BTC before the anticipated pump? Who knows, but it certainly doesn’t give the SEC any confidence to vote favorably during the September 7th Bitwise ETF decision.

As if these 2 incidents weren’t damaging enough to Cryptos reputation as a manipulated market, we witnessed yet another massive price dump yesterday, with Bitcoin losing roughly 10% of its value within the span of 12 hours, and Altcoins dropping by as much as 20%. If such an incident had occurred in the stock market (without any real external catalyst), it would turn into a global crisis with more investor lawsuits than stocks to trade in the first place.

Some were quick to blame the Goldman Sachs decision to terminate plans to launch a cryptocurrency trading desk. However, the real reason behind the crash was probably the movementof over 100,000 BTC (or ~ $1 billion) from wallets associated with Silk Road operator Ross Ulbricht. The coins movements were tracked through Bitmex’s exchange, which indicates that they may have been moved to orchestrate a market dump in order to profit from short selling and subsequently buy BTC at cheaper prices.

Regardless of the reason, this sort of irregularity is only possible when a handful of players in the market are able to take actions that have a huge ripple effect on all trading. This leads to another one of the SEC’s concerns about the crypto markets, which is that it is simply too small at this time. The fact that less than $1 billion can crash Bitcoin by 10% shows that the market simply doesn’t have enough volume to drown out the noise created by whales who seek to move prices in their direction.

What if Whales want to keep crypto this way?

There’s a clear case to be made that the current group of market-moving cryptocurrency whales are collectively interested in maintaining the status quo with regards to the wild west nature of the cryptocurrency markets. Putting yourself in their shoes; if you could control the price of Bitcoin simply by flooding the market with thousands of buy/sell orders, or moving 7 figure sums of money from one wallet onto an exchange, why would you support the idea of an ETF approval? All that would do is bring in more competition from larger whales who will most likely seek to do the exact same thing you’re doing, only more successfully and at a larger scale, as mentioned by Andreas Antonopoulos.

The current flock of cryptocurrency whales’ are wielding an unprecedented level of power that they will likely never experience again if institutional investors flood into crypto. Therefore, it is in their best interest to showcase to the SEC how easily they can manipulate the markets just before each new ETF application is set to be evaluated, thereby indefinitely postponing an influx of institutional money while they continue to enjoy their status as whales.

To observe the cryptocurrency markets is to see the purest example of a free market economy play out in real time. Traders are able to store and transfer millions of dollars anonymously, opening the doors to a level of financial freedom and autonomy that could never be experienced under any government system. Yet, with this freedom comes the overt acts of market manipulation that are simply a result of bad actors taking advantage of an unregulated space to the detriment of the majority who have good intentions.

Like most things, the negative always outshines the positive, and so ultimately, despite the benefits that retail and institutional investors could see with an ETF approval, the continued acts of market manipulation caused by crypto whales may prevent us from ever shedding our Wild West reputation in the eyes of the SEC and traditional financial system.

Are crypto whales ramping up manipulation to shut-down the possibility for an ETF approval?