It was the best times, it was the worst of times. It was the season of Monero ASIC mining, it was the season of frequent hard forks to prevent such mining. On April 6, popular privacy coin Monero hard forked…five times. MoneroC, Monero 0, Monero Original, Monero Classic, and Monero-Classic (again) will all continue running version 11 of the Monero protocol, while Monero itself has moved on to version 12.

What the fork just happened?

The Monero project has consistently hard forked every 6 months to upgrade its protocol with the latest features, and each fork has historically been supported by the community. However, this fork came with a controversial change in code that has splintered the Monero community, even though most of the developers and user community were on board. Namely, the fork looked to change the CryptoNight Proof of Work mining algorithm Monero uses.

This change aims to prevent anyone from mining Monero using ASICs, or Application-Specific Integrated Circuits, computers that can only do one specific thing (like mine Monero). The CryptoNight algorithm is vulnerable to attacks by ASIC mining, and this fear led the developers and many community members to get behind making a change.

The decision comes after Bitmain, Halong Mining, and other mining hardware companies announced that they have developed CryptoNight ASIC miners and would begin sales soon. The mining script change renders all of the new hardware useless for mining Monero, unless one of these forks can gain a foothold in the market.

What’s the story with these new coins?

While all of the new Monero-based coins are, in reality, the same coins on the same network, they are being identified with different names and logos by their respective projects.

According to Bitcoin Magazine, this Monero team is a group of “proof-of-work maximalists” that run hobby mining operations.

On the Monero 0 website, the team writes that they have “decided that the Monero Project’s strategy to continuously hard fork is no longer a stable or a sane strategy. We believe that Satoshi’s Proof of Work is the only mechanism for decentralized consensus.”

There is little information available about the Monero Original project other than a github repositoryand a press release sent to several media outlets.

In the press release the “lead developer” states that “Monero has always been about freedom of choice, about diversity and about the strong community behind it. We are providing the Monero fans [with] a possibility to support the iconic coin and stay on the original chain. “

At time of press, HitBTC supports trading XMO/BTC, XMO/USDT and XMO/ETH, and is trading around $6.

A representative of the Monero Classic project, Bento Tan, spoke to Bitcoin Magazine and described the team as a group of Monero enthusiasts from Singapore who believe that ASIC development is healthy for the growth of a cryptocurrency.

On their website, they highlight the issues they have with the apparent power of Monero’s core developers, stating that “the main message of Monero classic is that we believe that the developers changing the proof of work creates more centralisation and harms decentralisation.”

This objection seems to be with the centralization of decision-making power within the development team, as Monero Classic’s team observed that Monero’s “developers are saying that they can and will change the consensus rules whenever it suits them and the community seems to be conditioned into following the wishes of the developers.”

Tan told Bitcoin Magazine that the Monero Classic project has no connection with any of the other fork projects and does not plan on cooperating.

The Monero-Classic website reveals that an individual who goes by PZ (an “early Bitcoin evangelist” and the Secretary-General of the Litecoin Roundtable) is behind this project. He claims that he has watched the Monero community’s growing fear over ASIC mining and, like the other Monero Classic team, thinks that it is unfounded.

PZ acknowledges the community support of the ASIC-resistant fork but holds that there are also many in the community that accept ASIC involvement in Monero mining and will stay with the old protocol. He finishes with a unifying message and the belief that “these two thoughts should be given equal opportunities for development.”

Antpool, Bitmain’s mining pool, has tweeted support for this project, signaling that Bitmain (who clearly stands to benefit from an ASIC-minable Monero) may be involved with its development. 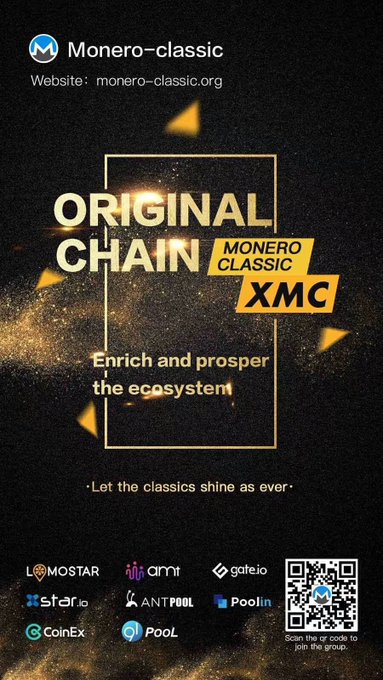 Monero (XMR) has forked. If you had XMR before 6 April, you can get an equivalent amount of Monero Classic (XMC) after 6 April. Find out more by joining its official group chat at http://t.me/xmccurrency  (doesn’t work inside the GFW)

This Monero Classic project is supported by the exchanges gate.io, LoMoStar, and CoinEx and trades at around $25 at the time of press.

Next to nothing is known about MoneroC. The project’s website is simply a notice that “more info [is] coming soon.”

They do have a twitter account that states that the project does plan on making some of the changes to the protocol that the main Monero project has, but in a way that will avoid centralization.

The team also mentions that their mission is the same as MoneroV (another Monero fork planned for later this month), but they are forking from the original code while MoneroV will be forking from the newly updated version 12 code.

I have Monero… does this affect me?

There are a couple issues that the newly forked coins may cause when it comes to your existing Monero stash. First, the new Monero forks do not implement replay protection, which means that sending coins on one of the forked chains may cause the corresponding coins on the other chain to be spent as well.

To avoid this, any of the new forked coins that you want to keep will need to be moved out of the addresses they reside in before you move your true Monero. Over time, the threat of a replay issue decreases as the new and old coins are mixed and become invalid on the opposing blockchains.

A somewhat more concerning threat is that the process of claiming and moving the newly forked coins may reveal your ownership of Monero coins. This possibility flies in the face of the privacy-focused mission of the Monero project. If the privacy of your Monero is important to you, it’s suggested that you choose one chain to follow and simply ignore the rest of the alternative coins. Whether you choose the chain that maintains the most value or make your decision based on which fork of the code you prefer, this is the best way to maintain privacy.

The fork is definitely taking effect! Since forking, Monero’s hashrate has decreased dramatically and the Monero community seems to be celebrating. For ASIC manufacturers, though, the story is a bit different.

While Bitmain has shown support for the Monero-Classic project and seems to be continuing with it’s plans to sell the new X3 CryptoNight miner, a smaller hardware firm, Baikal, has begun to sell off its own CryptoNight miners at a staggering 5-for-1 deal, clearly believing that the “true” Monero will survive and hoping to make back some of its investment in the technology.

As with the many forks we’ve seen of other projects like Bitcoin and Litecoin, only time will tell which efforts will survive and which will go up in flames. Keep an eye on CoinCentral for updates on the various Monero forks!

CoinCentral’s owners, writers, and/or guest post authors may or may not have a vested interest in any of the above projects and businesses. None of the content on CoinCentral is investment advice nor is it a replacement for advice from a certified financial planner.

Monero: A Tale of Five Forks