Often lauded as a bastion of anonymity, financial independence and personal security, ShapeShift exchange has made a controversial move in the eyes of some users by introducing KYC (know your customer) guidelines which will require their users to register their real identities to use the service.

CEO Eric Vorhees published an announcement which was posted on Twitter describing ShapeShift membership as a loyalty program offering rewards such as discounts and higher transaction limits to users completing KYC. 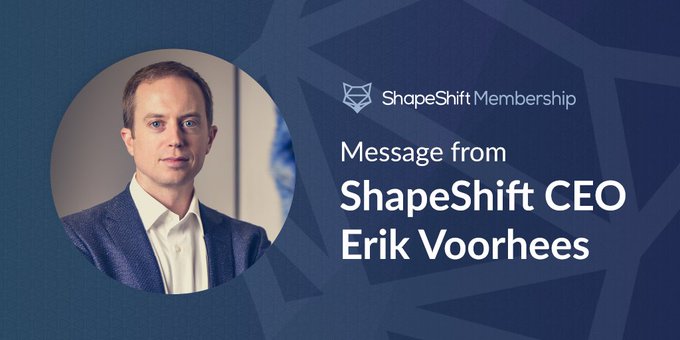 ShapeShift has big news for our users! We are now offering a new membership program, that will provide users with more benefits & a better user experience. Find out why we are making these changes from our CEO @ErikVoorhees: http://bit.ly/2Q2dYAy

“Membership requires basic personal information to be collected. Today, Membership is optional, but it will become mandatory soon.

Yes, that last detail sucks. We would prefer if the collection of personal information was not a mandatory element. We still firmly believe that individuals, regardless of their race, religion, or nationality, deserve the right to financial privacy, just as they deserve the right to privacy in their thoughts, in their relationships, and in their communications.”

Vorhees states in the post that there are three reasons for the decision – an increase in users asking for account-based features, the relationship between tokenisation and accounts, and of course, regulation.

“The practice of requiring customers to hand over personal private information is one we’ve struggled with since inception,” he said. “To the extent that digital asset technology remains a legal grey area, we need to be prudent and thoughtful in our approach as we navigate the regulatory environment.”

The move has unfortunately been met with immediate criticism throughout the space, with prominent figure Andreas Antonopoulos voicing his disapproval:

Just goes to show that any centralized entity will be pushed in that direction, which is why LN, atomic swaps and Decentralized Exchanges are the only way to resist surveillance economics.

In short, this is how regulators silently invade crypto.

Chervinsky stated that ShapeShift has historically enabled users to trade with total anonymity, referring to CEO Eric Vorhees as  “a true bitcoiner who speaks passionately about financial privacy & separating money from state.”

The lawyer went on to point out that the US government wouldn’t stand for that separation, calling the concept of anonymous crypto exchanges a “genuine nightmare” for regulators relying on financial surveillance. Chervinsky believes that FinCen, a bureau of the US Treasury Department, has threatened ShapeShift with enforcement action.

In 2013, FinCEN issued guidance saying that all the regulations governing money services businesses apply in full to crypto companies, and offered an insight into the shadowy world of forced regulation.

“Unfortunately, this is how regulation often gets done here in DC. Regulators accuse a company of violations based on a weak-but-plausible theory that might fail in court, but would be too expensive/risky/damaging for the company to fight in public, so the company cooperates.”

Users on Reddit didn’t take the news any better than those on Twitter, with comments such as “Shapeshift is dead to me,” “Shapeshift has lost its moral compass,” “So sad. Time to move on,” and “Goodbye forever!”

Shapeshift responded to one commenter asking if ShapeShift thought the users were stupid, referring them to a recent tweet by Eric Vorhees which simply said:

Greg Slepak@taoeffect
Sep 4, 2018
Replying to @ErikVoorhees and 3 others

Why don’t you write an honest blog post on the subject then? Enlighten us and convince us that you’re doing the right thing?

What I write is being watched very closely. Please give us time.