Bitcoin, the flagship cryptocurrency, has recently seen its price move past the $3,700 resistance after enduring a series of sell-offs this month that saw its price drop from a high of about $4,100. Its jump has been accompanied by a wider market recovery.

According to CryptoCompare data, BTC is currently trading at $3,736 after rising 2.6% in the last 24-hour period. In the last few days the cryptocurrency has been recovering from a recent low close to $3,500.

Some believe that behind the cryptocurrency’s recent sell-offs were whales that had recently started resurfacing after not touching their cryptocurrency holdings for between six months and two and a half years.

These whales can have a significant impact on the market as order book data shows a sell order of $18 million could crash BTC’s price by 10% on Bitfinex, one of the most liquid exchanges in the market. Adding to this, a study has found that 0.7% of all BTC addresses control nearly 87% of its supply, meaning large whales are indeed out there.

Bitcoin’s recent jump has seen it go past the $3,700 mark, a resistance an analyst with a large following on microblogging platform Twitter, Luke Martin, revealed BTC needed to go above to move further up. 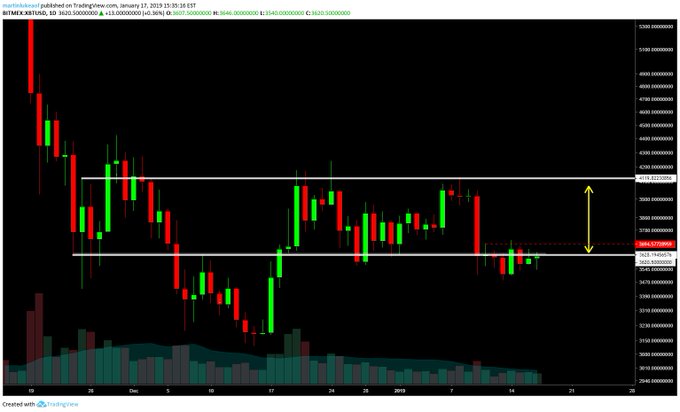 $BTC battling to reclaim the range all week. If price can get back above 3700 I’m more excited about alt positive momentum continuing.

Speaking to CryptoGlobe Mati Greenspan, a senior market analyst at eToro, has in the past revealed these price points aren’t too important, however, as the $3,000 support and the $4,000 resistance are more relevant.

Bitcoin wasn’t the only cryptocurrency moving up. Data shows most top altcoins are currently up, with ether currently trading at $126 after rising 4.6%, and XRP at $0.335 after rising 3.5%.

Other top altcoins like BCH, EOS, and ZEC moved up little over 3%, while NEO and Litecoin rose 8.5% and 6.2% to trade at $8.25 and $32.9 respectively. These altcoins’ gains have marked a clear crypto market recovery this week.

Looking at the MVIS CryptoCompare Digital Assets 100 Index, a market cap-weighted index that tracks the price performance of the top 100 cryptocurrencies, we can see the market has risen 2.6% in the last seven days. Notably, it’s up over 8% from this week’s low.

Behind this price performance were various developments, including the upcoming launch of the TRON-based BitTorrent token (BTT) via Binance’s Launchpad, and bitcoin’s hashrate hitting a three-month high as miners have been showing renewed confidence.