Bitcoin Cash (BCH), the instantaneous low-cost fork of Bitcoin has gained 24% in value over the weekend and 6% on the daily index. While Bitcoin has been unable to break past the $4100, the alternative Hard Fork seems to be gaining traction. The 24-hour trading volume on BCH also exceeded 500 million dollars in the past day. The price has risen from $150 to a high of $165 in the daily time-frame.

The total market capitalization of the cryptocurrency market, however, fell below the $140 billion mark again as FUD around ETF approval and wide-scale adoption remains.

Bitcoin Cash (BCH) which is a Hard-Fork of Bitcoin boasts of its technical prowess by increasing the block size. While the advocates of BCH has been criticized on its additional utility, Bitcoin Cash (BCH) is almost as abundantly distributed as Bitcoin, and it is a faster and cheaper alternative to Bitcoin (BTC) too.

Leading Chart Analysis, Peter Brandt recently suggested that BCH might be forming a resistance near the $148 level as it looks for a breakout. The price has broken from the resistance and gained 24%, hence the bullish momentum of BCH might continue till it reaches the next resistance near $420 level. 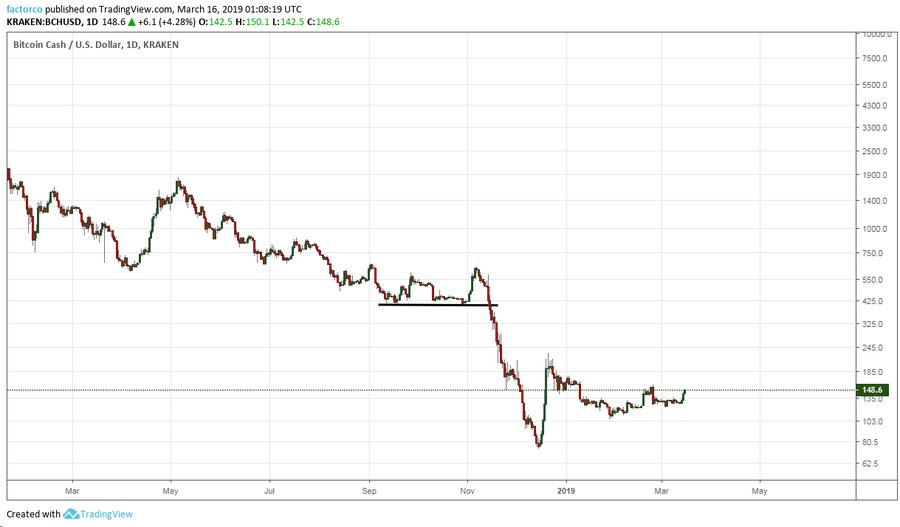 $BCHUSD the next macro cap to complete a bottom?

The price of BCH on 16th December 2018 was $78, which was down almost 98% from it’s All-Time High (ATH). Hence, if fundamentals continue to support, there is a lot of upside to the coin that might be revisited.

The 100-Day Moving Average is close to the 50-Day Moving suggesting a revival of the bullish sentiments in Bitcoin Cash (BCH). However, the RSI index has entered the over-bought region.

Nevertheless, if the cryptocurrency markets take a bearish turn again as apprehended by a couple of experts, it might affect the price of Bitcoin Cash (BCH) as well.