Isabelle Mateos Y Lago, chief multi-asset strategist at BlackRock, an investment management corporation with $5.7 trln in assets under management, has said that the company is keeping cryptocurrency under “close review” as an “interesting development.”

Speaking to Bloomberg TV Monday, Jan. 29, the senior executive said that although cryptocurrency did not constitute “an investable asset” for the world’s largest money manager at present, it was actively tracking progress as it is “clearly evolving very fast.”

The comments temper those of BlackRock CEO Larry Fink, who last week went on record at the World Economic Forum 2018 to describe the space as an “index of money laundering” and previously implied he had no plans to enter the future Bitcoin ETF arena.

“The fact that interest has persisted despite these repeated hacks,” she continued, describing customer demand for Bitcoin at BlackRock, “despite regulators waking up and trying to catch up with this new development and gradually weeding out all the illegal uses suggests there really is something to it.” 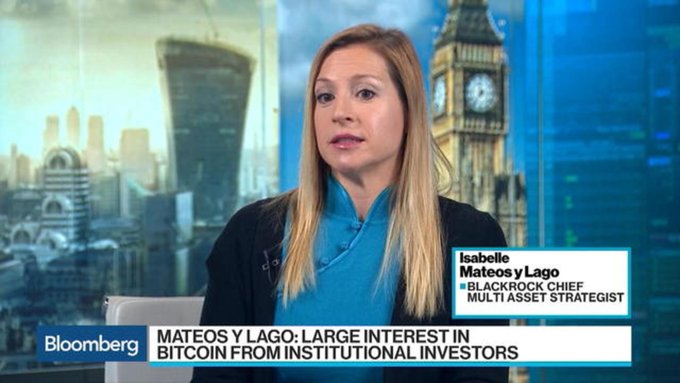 By adopting a ‘not-now-but-later’ perspective on interaction, BlackRock echoes sentiments from Deutsche Bank’s Chief Investment Office leader Markus Mueller, who likewise told Bloombergthat while crypto is for “speculative” investors now, the next five to ten years should see regulatory progress allow its treatment as a “established asset class.”

“There’s lots of ways to get in; the question is, are they safe?” Mateos Y Lago continued on Blockchain and ICO investment opportunities, saying it was “hard to put a fair value” on them for regular investors.