Two US congressmen introduced bipartisan legislation designed to prevent cryptocurrency price manipulation and position the United States as a leader in the crypto industry.

“Virtual currencies and the underlying blockchain technology has a profound potential to be a driver of economic growth,” the congressmen said. “That’s why we must ensure that the United States is at the forefront.”

Soto and Budd said the laws they proposed would protect consumers and investors without dampening the “environment of innovation” that would maximize the potential of these groundbreaking technologies.

In September 2018, the New York Attorney General’s Office released a report concluding that some cryptocurrency exchanges can easily be manipulated because they lack sufficient consumer protections, are riddled with conflicts of interest, and don’t have safeguards to prevent abusive trading.

In November 2018, the US Department of Justice launched a criminal investigation into whether the cryptocurrency market’s spectacular price spike in 2017 was manipulated using tether (USDT).

The DOJ probe came five months after a University of Texas finance professor published a report claiming that at least 50 percent of the increase in bitcoin’s price in 2017 was artificially manipulated using tether.

Griffin — who specializes in spotting financial fraud — claimed tether was used numerous times to buy bitcoin on Bitfinex after its price slipped.

“It was creating price support for bitcoin, and over the period that we examined, had huge price effects,” Professor Griffin said. “Our research would indicate that there are sophisticated people harnessing investor interest for their benefit.”

Others, though, have questioned this thesis.

While skeptics point to regulatory crackdowns to discredit the industry, bitcoin bulls like the Winklevoss twins and Fundstrat’s Tom Lee welcome regulatory scrutiny, saying it will help — not hurt — the industry by ridding it of scam artists. This, in turn, will legitimize the market, they argue.

“Do I think bitcoin as a long-term fundamental story is broken? I don’t think so,” Lee said. “Price at the moment isn’t confirming fundamentals.” 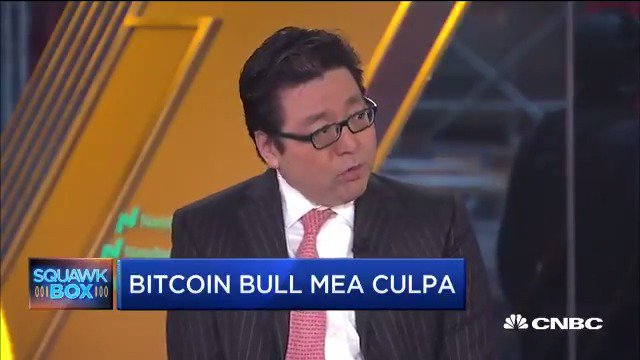 Lee also pointed out that bitcoin’s market penetration is gradually increasing, despite recent setbacks. “The next wave of adoptionis institutional,” he said. “There is a crossover happening. This is just an awkward transition.”