Today, Coinbase — cryptocurrency exchange, brokerage, wallet, and operator of GDAX — and Hong Kong-based exchange Bitfinex have announced the implementation of P2SH Segregated Witness (SegWit). As per the companies’ tweets, users will experience improved transaction processing times and lower fees across the Bitcoin network.

Our engineering team has finished testing of SegWit for Bitcoin on Coinbase.

We will be starting a phased launch to customers over the next few days and are targeting a 100% launch to all customers by mid next week. 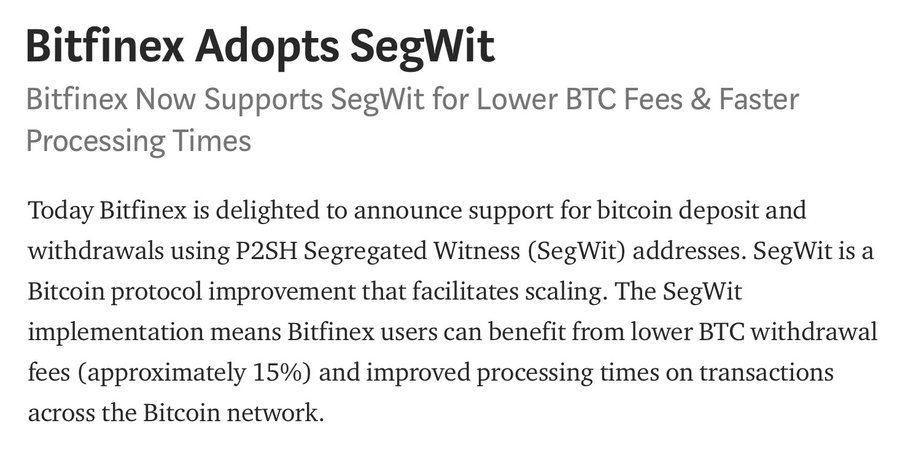 We are proud to announce support for SegWit.https://medium.com/bitfinex/bitfinex-adopts-segwit-8e6c5d72fcf9 …

For Coinbase, this process began in December, when vice president and general manager Dan Romero indicated to investors and users that the exchange would adopt the SegWit protocol in early 2018

The protocol, an oft-debated measure introduced as a means of scaling Bitcoin to meet increased demand, is expected to decrease congestion in the cryptocurrency’s network, resulting in faster transaction times and lower fees.

Fees have been a huge problem for Bitcoin users — although they have fallen to recent lows at an average of $0.79 on Sunday. In December, amidst an upsurge in use and value of the cryptocurrency, prices reached peaks of up to $34.00.

SegWit is a Bitcoin protocol improvement that facilitates scaling. The SegWit implementation will provide Coinbase and Bitfinex users with lower transaction fees and improved processing times on transactions across the Bitcoin network. This happens by increasing block size limits by separating signature data from transaction data.

In addition to increasing capacity, SegWit will also effectively fix transaction malleability, a potential attack based on the modification of transaction IDs prior to network confirmation. Further, SegWit also lays the foundation for future Bitcoin development efforts like the implementation of Lightning Network, which will permit the network to process millions to billions of transactions per second.

Moving forward, the question is what will happen as the Bitcoin network continues to grow. A hard-coded limit on the size of blocks limits how many transactions the network can process per second.

Some in the bitcoin community wanted to simply raise the block size — see Bitcoin cash. Instead of increasing the maximum block size, SegWit separates cryptographic signatures from the rest of the blockchain data, so these signatures aren’t counted against that one-megabyte block-size limit — consider it a de facto block-size increase.

That said, SegWit is not the be all end all: If 100% of transactions use the new protocol, it will roughly double the network’s capacity — but that’s it. Further increases will require more radical changes.

Romero said the exchange has carefully considered the implications of adopting SegWit:

“In terms of our engineering priorities, securely storing customer funds remains our top priority. Our next priority is to ensure that our platform remains performant during periods of peak volume,” Romero said.

The adoption of SegWit is a huge undertaking for the Coinbase because its platform is much larger than most other digital currency exchanges. The exchange has millions of users active each month, and it accounts for a significant portion of all Bitcoin trading. This means the impact of its decision to adopt SegWit could have repercussions on the entire cryptocurrency space.

Bitcoin Cash vs. Bitcoin The history between Bitcoin and Bitcoin Cash is a contentious one, but we’re here to look at the advantages and disadvantages of each…

SegWit Finally Embraced by Coinbase and Bitfinex, Bright Future Ahead