Cryptocurrency purists have always judged new coins by a few important factors. On top of that list has always been decentralization. However, one of the bigger coins in the cryptocurrency market has been hiding in plain sight with its centralized nature. But, its recent boom that saw it finish last year as one of top performing crypto assets has seen it garner a lot of hate.

What is causing this Ripple in the market?

Ripple, a token created by the company of the same name that aims to facilitate transfers between major financial corporations. In this goal, it has seen much success over 2017 with a few major banks partnering with it.

Despite working with central banks, it is the centralized nature that has many up in arms. When the system was created in 2013, the development team removed many of the key features you find in most other cryptocurrencies.

This was done in so that the token could be geared towards these major financial institutions, which is fine and probably necessary, but it becomes problematic when Ripple is counted in the same breath as Bitcoin and other very decentralized digital currencies.

Ripple issues its token in a centralized fashion, unlike other coins which are mined and incentivized by people dedicating computing power to accumulate them.

“It’s not a cryptocurrency”

Many in the community, including creators of other coins, have slammed Ripple’s definition as a cryptocurrency.

“For the most part, I’m not frustrated or angry with Ripple, I’m frustrated with the community’s general lack of knowledge these days (i.e., Ripple is a symptom, but not the problem itself),” Reddit user thieflar, a moderator of the Bitcoin subreddit, tells Inverse.

“The fact that Ripple is labeled as a “cryptocurrency” and included on sites like CoinMarketCap has been, for the most part, seen as misleading and inaccurate for many years now,” thieflar adds.

Litecoin creator, Charlie Lee, has said that he does not believe that Ripple should even be considered a cryptocurrency. 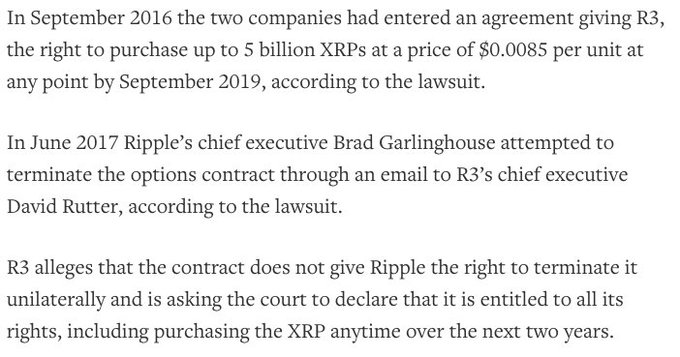 XRP is NOT a crypto-currency.https://www.reuters.com/article/r3-ripple-lawsuit/blockchain-startup-r3-sues-competitor-ripple-idUSL2N1LP181 …

Ripple is locking up $14 billion of its native “currency” to control its price?
Locking funds itself is bad. The intent is even worse.

Despite the mixed opinions of Ripple, it still made big gains in 2017, going up 36,000 percent. This caused it’s market cap to push the coin up to second on Coinmarketcap for a period.

However, even this accolade has been slammed.

“It seems like the multiple-year-long cryptocurrency bull-market eventually reached a point where newcomers have been buying indiscriminately, not understanding anything about what they are buying other than ‘it’s a crypto coin so you can make money with it,’ and Ripple managed to get caught up in the madness,” thieflar continues.

Interestingly, Ripple itself agrees that it should not be bought indiscriminately to try and make money off the gains.

“Private exchanges and liquidity providers may choose to hold additional XRP for trading. Ripple (the company) does not promote XRP as a speculative investment,” it is stated in their gateway guide.

Ripple Hate: Is Ripple a Wolf in Sheep’s Clothing?