Galaxy Digital CEO Mike Novogratz appeared on CNBC’s Closing Bell on May 4, where he outlined his bullish stance on hard assets like Bitcoin and gold.

The heavily mustachioed Novogratz looked forward optimistically to the Bitcoin halving on May 12—a deflationary event which contrasts greatly with the Fed’s money printing regime. 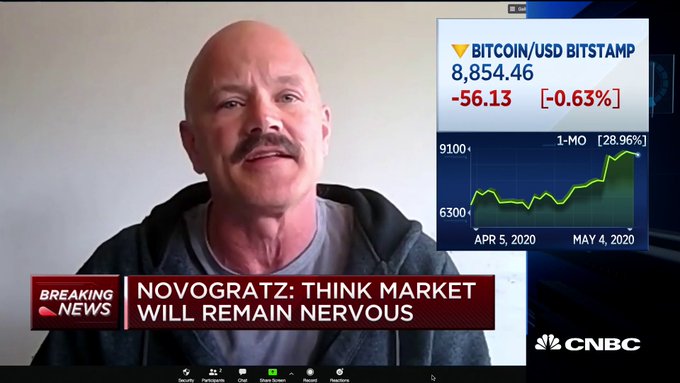 “I love Bitcoin. Next Tuesday we have the Bitcoin halving where the inflation rate gets cut in half,” he said, “You talk about inflation in fiat currencies where the Fed is printing money like a money printing machine, and in the Bitcoin space the money supply gets cut 50%. So, big deal there.”The billionaire investor expressed doubts about the stability of traditional stocks in times of pandemic. As the Fed continues to inflate the money supply by printing cash out of thin air, Novogratz proclaimed a bullish stance on hard assets, including Bitcoin.

“I still am very bullish [on] hard assets. This idea that central banks and fiscal agents around the world have put us into a position we’ve never been in before—with a 20-25% GDP budget deficit coming. And we’re not sure how the world will handle that. I think there’ll be a push to hard assets there; there’s a very decent chance—much higher than we’ve had before,” he said.

“And so it’s all positive stuff in terms of flow in that space. That’s where the bulk of my risk is. It’s been a fun environment in the Bitcoin space; after a long desert we now have real activity,” he added.

As of this writing, the price of bitcoin is about $19,000 and, at less than 15% of my net worth, the single largest position in…

While some expect bitcoin’s (BTC) upcoming reward halving to light a fire under the cryptocurrency, the options market seems worried about the event turning out to be…

Mike Novogratz on the Bitcoin halving