Although a correlation between global equity markets varies over time, they can at times be watched as a group to see which might be leading or lagging. This relative performance can provide an indication of what might be coming next for particular markets or at least point to what signs to watch for. In cases of high correlated volatility, as we’ve seen recently, the signs can be particularly insightful.

Recently, each of the equity markets followed peaked at record price or trend highs, fell sharply together, and then rallied sharply together. The question now for investors is what comes next? Is the volatility over or will we see more sharp moves in the near-term?

As of last week, each market has fallen below the recent swing lows from four weeks ago and closed below those lows on a weekly basis. This price behavior triggered bearish trend continuation signals. It not only points to further downside for those indices, but also the bearish investor sentiment represented may spread to other markets. Markets in Japan and China look particularly vulnerable.

Following the 20,940.15 low hit three weeks ago around support of the long-term uptrend line, the Nikkei 225 bounced by as much as 7.4% as of the last week’s 22,502.05 high, which is 50% retracement of the downtrend. However, resistance was quickly seen, and the more powerful downside force again kicked in, driving the index down 711.14 or 3.25% to end at 21,181.64. The decline of the top included two good sized gaps, reflecting the conviction of sellers, and the week ended at a 20-week closing low, a bearish sign.

A drop below last week’s low of 21,088.96 is short-term bearish, but a decline below and subsequent daily close below the recent swing low is needed to trigger a continuation of the developing bearish trend. The Nikkei next heads towards 20,318 if a bear trend continuation is triggered. The technical condition of the Shanghai Composite is the worst of the major equity indices as it clearly broke down from a long-term ascending trend channel during the recent sell-off. Following the 14.6% drop off the 3,587.03 peak in January, the index found support at 3,062.74. It subsequently rallied 8.9% as of last week’s 3,335.99 high. That high also completed a 50% retracement of the decline.

Nevertheless, if we step back and look at the developing pattern, we see a bearish breakdown of a rising trend channel followed by a retracement back to a resistance zone around the bottom of the channel. This is classic price behavior for a bearish trend; breakthrough support followed by a retracement back to that price zone to test it as resistance. A drop below last week’s low of 3,228.59 points to further downside 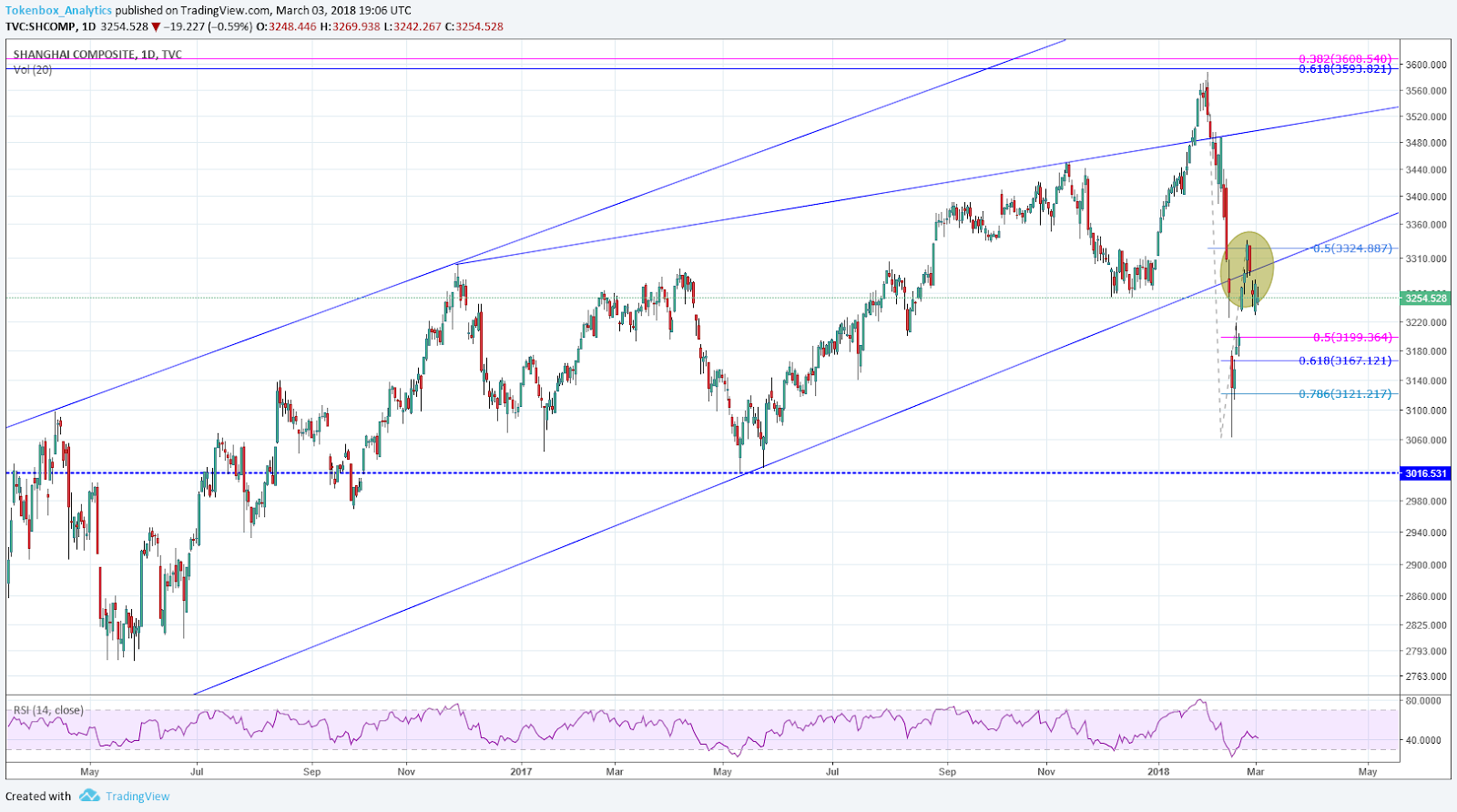 As first mentioned last week the major cryptocurrencies have been strengthening or consolidating over the past several weeks in a relatively correlated fashion. A decisive advance or decline for one or a few may point the way for the group, and therefore we will be watching closely for signs of relative strength and weakness. We can not only see relative strength in performance numbers but also within the evolution of the uptrend. Sometimes this can be a more reliable indicator for what might be coming next since a trend has a tendency to continue for some period of time and as it progresses there are multiple bullish signals that provide an opportunity to join in the advance.

For the week, six out of the eight currencies followed were positive with only two negatives, but by less than 5%. This is an improvement over the previous week when they all were down for the week.

Bitcoin is attempting to break out to a new trend high. If it occurs, there will be a new bullish signal for the crypto. A move above the prior swing high of 11,780 signals a continuation of the uptrend that has followed the spike low bottom of 5,920.72 reached a month ago. Last week Bitcoin was up $863.9 or 8.5% to close at 11,029.99.

IOTA had the second best performance last week, up 0.21 or 12.1% to end at $1.92. It has been struggling to continue higher following the peak of $2.21 hit three weeks ago and the subsequent pullback. For the past five days or so it has been pushing up against the resistance zone around its long-term downtrend line. A breakout above the six day high of 2.09 will signal a move above the line and be an early bullish signal that will require further confirmation as price progresses higher, if it is to do so.

Based on price structure and the progression of the uptrend, Monero is leading the crypto sector higher. Following the $150.00 bottom reached four weeks ago the XMR/USD pair has rallied as much as $223.82 or 149.2% as of Saturday’s $373.82 high. Regardless of the rally, the bottom looks solid as it matched prior resistance (now support) from the Oct.-Sept. 2017 peak and the 78.6% Fibonacci retracement zone.

A bullish trend continuation signal was given late last week as the cryptocurrency broke out above the prior swing high of $330.00. That breakout reflects strength in the second leg of the uptrend coming off the recent bottom. So far, out of the eight cryptos discussed, Monero is the first to take out the first swing high that occurred since the bottoms from a month ago. It is now in a good position to at least complete a measured move or ABCD pattern around $437.49, if not continue further. When combined with the $449.18 swing high resistance zone from January a target zone from around $437.49 to $449.18 is generated.

Dash: May be close to moving again

For the past ten days or so Dash has been consolidating within a relatively narrow range with a low (support) of $570.68 and a high (resistance) of $652. This range is sitting right on support of the long-term uptrend line. Therefore, the consolidation pattern has potentially great significance than it might otherwise since the rising line represents the long-term uptrend.

A trend can be anticipated to continue until proven otherwise. Consequently, a decisive breakout above $652 is not only a breakout of a short-term consolidation range but it also signifies a successful test of support of the trend line and should lead to additional long-term bullish continuation signals. Fibonacci retracement levels of the downtrend are added on the enclosed chart and can be looked at as potential near-term targets.

On the downside, a break below $570.68 is bearish and represents the second time in a month that the uptrend line would have been busted. Developed equity markets globally continued to outperform most cryptocurrencies last week, as they have since the start of the year. The top equity market for… The views and opinions expressed here are solely those of the author and do not necessarily reflect the views of Cointelegraph.com. Every investment and trading…