Monday, May 28: crypto markets are experiencing a significant decline with all top ten cryptocurrencies listed on Coinmarketcap (CMC) in the red. Some altcoins such as Cardano (ADA) and Bitcoin Cash (BCH) are seeing losses up to around 30 percent over the last 7 days. With a decline of around 35 percent over the last 30 days, Bitcoin (BTC) has hit a monthly low of $7,259 at press time. The cryptocurrency continues its downward trend started in early May after the price almost touched the $10,000 mark on May 6. Ethereum (ETH) is down 20 percent over the past week, trading at $536 at press time. Of the top 10 coins, Cardano has seen the largest loss over the past 7 days, currently trading at $0.18, according to Coinmarketcap.

BCH has lost 26 percent over the past week and is down 7 percent in 24 hours to press time, currently trading at $934.

While the crypto markets overall are seeing a downward trend, some of the fundamental Bitcoin indicators such as the hashrate and the number of the Segregated Witness (SegWit) transactions are growing steadily, indicating the continued development of the network.

Last recorded on May 27, the current Bitcoin network hashrate is at around 35.75 petahash per second (PH/sec), according to BitInfoCharts data.

Ran Neuner, the host of CNBC’s Cryptotrader show, tweeted May 27 that despite the fact that Bitcoin has lost up to 50 percent over 2018 so far, its price is still up 700 percent since January 2017, when the coin was trading at around $1,000. 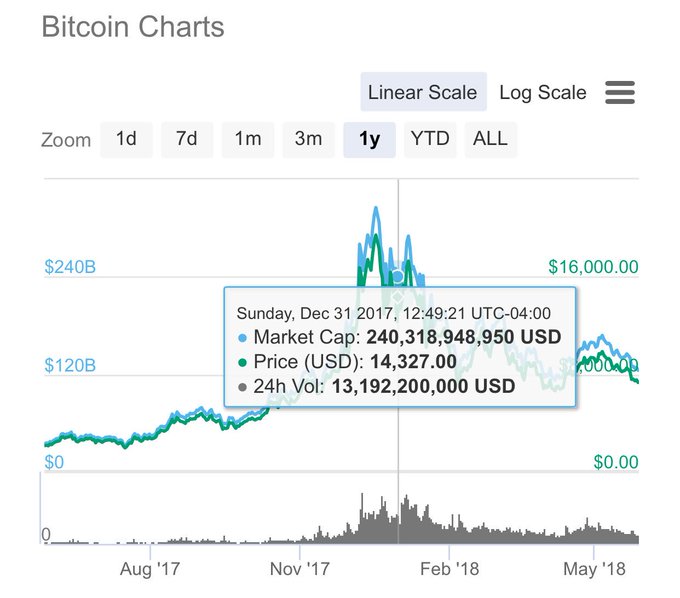