Amid a declining market, one of the crypto industry’s foremost events recently flew under the radar of many investors. The event, Devcon4, an Ethereum-centric event attended by some of this industry’s best and brightest, highlighted the fact that while the market is tanking, crypto’s fundamentals are booming beyond belief.

Among the multitude of developments announced at the ongoing Devcon4, which is hosted in Prague — a crypto-friendly city in and of itself — some stood out more than others, including the premiere of MetaMask’s mobile client, an update on the second phase of Ethereum’s long-awaited roadmap, and an ever so silly singalong with Vitalik Buterin himself.

Since its inception, the Ethereum Network, with all of its out-of-this-world decentralized applications (dApps), blockchain-based tokens, and smart contracts, has often been seen as an abstract entity by many consumers. However, consumers haven’t been left in the dark, as MetaMask’s internet browser plugin, one of the first applications built solely for the Ethereum blockchain, was and still is a viable way for users to interact with Ethereum’s vast ecosystem.

While MetaMask has eased the qualms of many perplexed users, there has been a gaping hole in the hearts of the mobile subset of Ethereum users, who have had little opportunity to interact with the blockchain ecosystem through their mobile devices.

This changed on Wednesday, however, as Joseph Lubin, a Canadian technology entrepreneur and co-founder of the Ethereum project, took to Twitter to express his excitement for a development update from the dedicated MetaMask team. Lubin, who currently resides over ConsenSys, the so-called “Google” of the blockchain world, wrote: 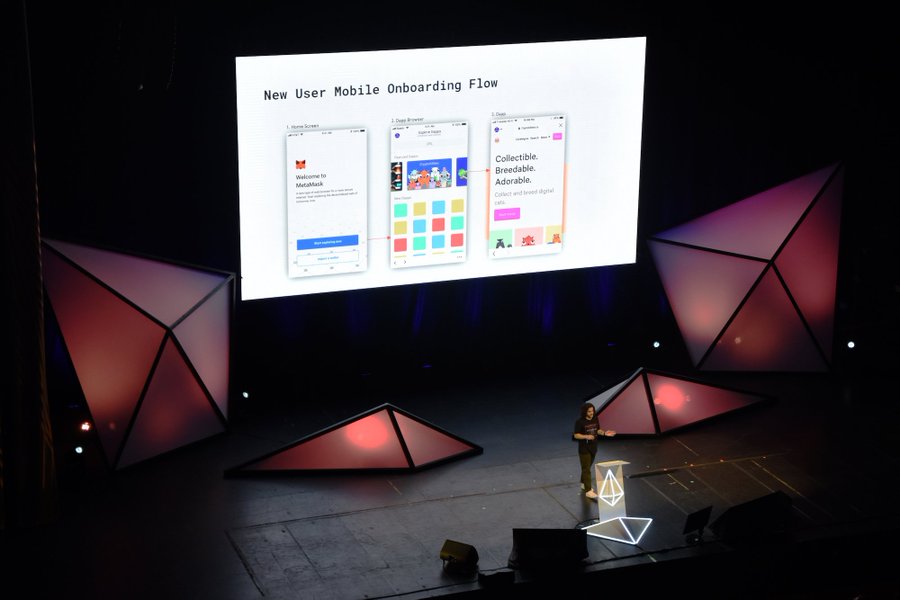 The @metamask_io mobile app was just announced at #Devcon4! Everyone’s favorite #Ethereum browser extension is coming to your phone. The team is focusing on not being ‘just a wallet’, but a portal to the world of all things #blockchain. https://metamask.io/

Although this announcement accentuates the fact that MetaMask is poised to release a mobile client, which will allow smartphone users to hold Ether and ERC tokens, and to interact with dApps and smart contracts, a timeline was seemingly left undisclosed.

After months of anticipation, on Wednesday, Vitalik Buterin, the de-facto face of the Ethereum Network, took to Devcon4’s stage to convey a keynote in front of a sold-out crowd. While many didn’t expect it, Buterin, who plays a role as Ethereum’s champion and figurehead, cut out some time to highlight Ethereum’s long-standing scaling debate.

Like Bitcoin, Ethereum is currently backed by a Proof of Work (PoW) consensus protocol, which allows miners to allocate their computational resources to validate and secure transactions on a decentralized network, albeit at a sluggish pace.

However, unlike Bitcoin, due to PoW’s relative inefficiencies and the rise of ASIC centralization, the Ethereum Core development team has sought to move away from the network’s original consensus mechanism. Ethereum’s first step towards abolishing PoW has seemingly taken the form of the so-called “Serenity Protocol,” which, as explained by Buterin, is a hybrid between PoW and Proof of Stake (PoS), the former’s metaphorical estranged cousin.

As noted out by Tim Copeland of Decrypt Media, who is in attendance at Devcon, Buterin was quoted as saying:

“Serenity is the world computer as it’s really meant to be. Not a smart phone from 1999 that can process 15 transactions per second and maybe, potentially play Snake.”

Per Buterin, through the use of PoS, a brand spanking new blockchain, and a three-part roll-out, Serenity may eventually facilitate “pure PoS consensus, faster times to synchronous confirmation (8-16 seconds), economic finality (10-20 minutes),” and, arguably most importantly, a 1,000x scalability upside, which should fix all of Ethereum’s current scaling shortcomings.

Closing off one of Devcon4’s last keynotes of the day, Buterin joined hands with a number of prominent Ethereum community members and Jonathan Mann, an internet-famous songwriter, to inject a bit of fun into the conference crowd, who had likely undergone a caffeine crash after a long day of friendly discourse, discussion, and development. 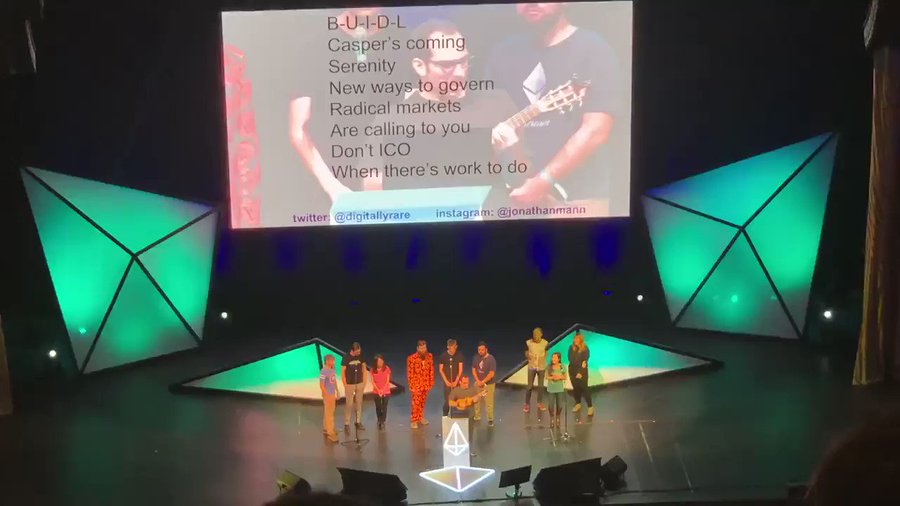 Today we learned @VitalikButerin is a backup singer! #Devcon

The song, which was sung by Mann, Buterin, and those in the auditorium, jokingly highlighted Ethereum’s “failed ideas” and a short recap of the project’s tumultuous history. While the topics the song covered may sound like a drag, Mann closed off his piece of art with a sing-a-long, beckoning the Devcon4 audience to sing “B-U-I. B-U-I. B-U-I-D-L” along with other silly, but fun crypto cliches.

It is important to note that while the sell out conference’s first day was filled to the brim with exciting announcements, the event is far from over, with there being two jam-packed days left for Devcon attendees to shout from the rooftops that crypto is here, and is here to stay.

As put by Lubin, the aforementioned founder of ConsenSys, in a recent “First On CNBC” interview:

“Digital currencies are not on the edge of collapse. We’ve seen lots of booms and busts in our ecosystem over the last 10 years and it has never been stronger than it is now. I measure that in terms of the number of projects, people, entrepreneurs, and developers  [involved in this space.] It is orders of magnitudes bigger than it was and the foundational infrastructure is getting built out.”

Crypto Developments Aplenty at Devcon4, Ethereum 2.0 Among Them