Charlie Lee, the founder of Litecoin (LTC) and former Director of Engineering at Coinbase, has taken some bold steps recently in the crypto world.

In December, Lee announced in a Reddit post that he had sold and donated all of his LTC, citing a conflict of interest. In January, Lee tweeted a proposal for a Litecoin soft fork that would allow for a new type of fee market to develop for the altcoin.

Lee was a keynote speaker at the Blockchain Connect conference in San Francisco on Jan. 26, where Cointelegraph had the chance to talk to him backstage about the then-breaking Coincheck exchange hack news, cryptocurrency adoption, and the importance of keeping perspective in a market as volatile as crypto.

CHARLIE: Funny, I was just reading a Cointelegraph article [on the Coincheck exchange hack]. Did this just happen right now?

CT: Yes, it happened this morning [Jan. 26]. So what are your first thoughts on the Coincheck hack?

CHARLIE: My first thought is it’s unfortunate that the exchange got hacked. I mean, it’s not unexpected. But I think this is just the nature of the game.

Freedom of money means that you have full control over your money, and if you give control away to an exchange, then they have the control over the money and they can easily lose it.

This probably won’t be the last time we hear about an exchange getting hacked. But this is definitely one of the largest hacks that I remember in terms of percentage of the coins out there. NEM is 8 billion dollars [NEM market cap]. 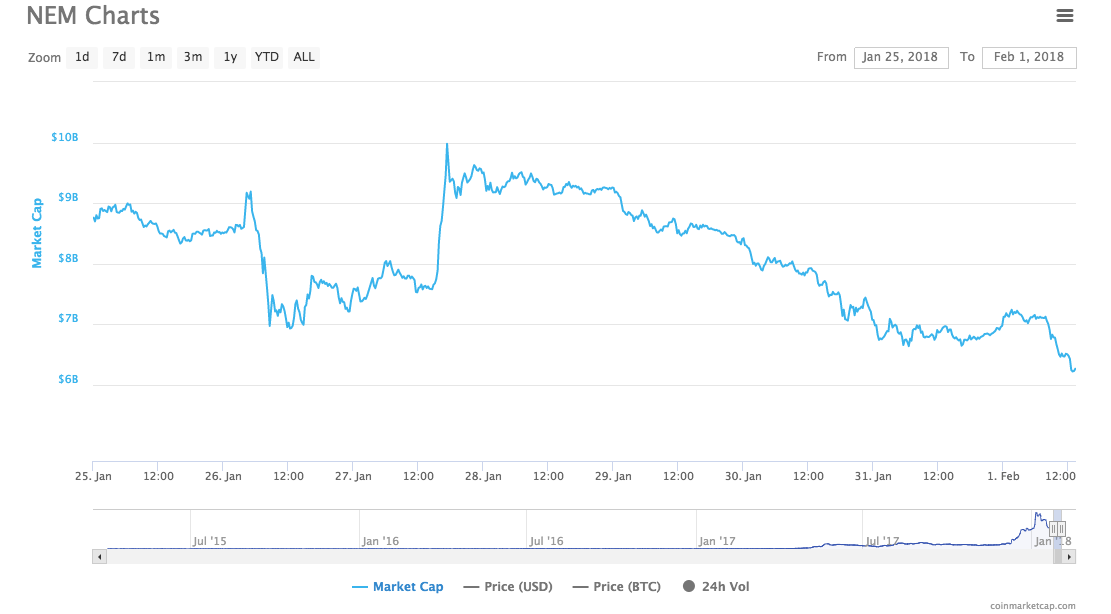 So, it’s 6-7 percent [*5.8 percent] of all the coins out there that got hacked. And if it was a Proof-of-Stake coin, it becomes very susceptible to an attack if the hacker wants to use that coin to attack the network. [*NEM is Proof of Importance]

So we’ve seen blockchains like VeriCoin actually revert the blockchain. Or even Ethereum did it with the DAO hack, where they reverted and they took the money back and gave it back to the rightful owners. So that’s the first thing I thought of. Are they going to do a hard fork to take the money back.

CT: We were just talking about whether or not NEM would do a hard fork.

CHARLIE: Yeah. And for Bitcoin and Litecoin this is something I would never encourage or promote, doing a hard fork to take the money back.

The base layer needs to be censorship resistant. Developers or companies cannot unilaterally decide to reverse transactions. Once you draw the line of doing that, where do you stop?

So, I’m just taking guesses; I’m not sure what they are thinking right now. But it’s unfortunate for the exchange and the people who had coins on the exchange.

[On Jan. 27, Coincheck announced that it would refund all users affected by the hack. The NEM team is opposed to conducting a hard fork and has since reported that the hackers are now moving some of the stolen coins to different addresses]

CT: So your position is: “It’s unfortunate, but if you put your money in the hands of someone else, as in a third party, then this is the risk you take”?

CHARLIE: Yes. It’s by nature. You have control over your money: if you want to give that control away to other people, then there’s definitely a risk involved.

CT: Do you think the recent introduction of cryptocurrency trading options into the Robinhood app shows that crypto trading is on the rise?

CHARLIE: I think things like Robinhood and Square Cash adopting Bitcoin — letting people buy and sell Bitcoin and other cryptocurrencies — is definitely a very good sign of slowly moving towards mainstream adoption. So I think it’s very good, I’m very excited about it.

Especially the fact that Robinhood could potentially support Litecoin in the future. It makes it easy for the average person to get into the space, to get exposure to the coin, easily buy a small amount of it and use it.

This is something that Coinbase has been doing for many years, and also the reason why I joined Coinbase to help make this happen — to help make Bitcoin and Litecoin and other coins just easy to use for the average person, for moms and dads.

CT: Why did you end up eventually leaving Coinbase?

CT: But you sold all your stake in that?

CHARLIE: I did sell my coins, but I’m still full-time on Litecoin development. I sold my coins due to conflicts of interest and not because I didn’t believe in the project.

CT: Do you think that any person who owns or works full-time on a cryptocurrency shouldn’t have any stake in their own coin?

CHARLIE: No, not necessarily. I think I’m in a special position because I have such a large social media presence, and I have huge influence on the future of Litecoin and price movement of Litecoin, so I’ve always felt a bit conflicted when I’m promoting Litecoin on social media and see that affect the price. Also the fact it is helping me financially — so I kind of wanted to remove the financial aspect from my work.

CT: In the very first panel this morning the CEO of Kraken, Jesse Powell, said that, “If you feel that your psychology is being manipulated by the chart you’re looking at, then you should just trade the fundamentals. You don’t have to trade the chart.”

Do you think that a single person on Twitter can really manipulate the market that much?

CHARLIE: I think it’s just human nature that people get influenced quite a bit by what they hear and see around them.

Long term, I’m very bullish for Litecoin and Bitcoin price-wise, but for short-term fluctuations it can move drastically in either direction and it’s hard to predict.

CT: Do you have any particular predictions for the next year for either Bitcoin or Litecoin?

CHARLIE: It’s impossible to predict. That’s why I don’t do any predictions. Last year before the rise, when Litecoin was at $4, I told myself that if Litecoin hits $30, it would be a great year. I mean, it’s amazing, right? If it goes from $4 to $30, that’s almost a nine times increase. That’s amazing returns.

That’s also why I made a tweet late last year saying that if you can’t handle Litecoin going to $20 from the high, then don’t invest in it.

A lot of people who lose money are the ones that get in on the high or somewhere in the middle. Then the price drops by a lot and then they have to sell it because it’s too much money for them to lose. So, they sell at the low and then they don’t catch the rise back up.

People misread that [tweet] and thought that I was telling them to sell because it’s [Litecoin] going to drop 90 percent. I mean, it could. But I’m just raising the possibility that it’s too volatile and you shouldn’t bet more than you can risk that you’ll lose. Long term is good, short-term – no one knows.

CT: Thank you so much! We really appreciate it. Very nice to meet you.

This interview was conducted in collaboration with Cointelegraph news editor, Olivia Capozzalo.

*Note from the Cointelegraph editorial team