The abrupt and strong performance of the dominant cryptocurrency fueled other major crypto assets in the likes of EOS, Ethereum, and Litecoin to record large gains in the range of 4 to 7 percent.

Ethereum spiked from $147 to $157 immediately after the initial price movement of Bitcoin by around 6.8 percent.

CONFIDENCE IS RETURNING TO BITCOIN AND THE CRYPTO MARKET

Speaking to CCN, Three Arrows Capital CEO Su Zhu stated that the recent price movement of cryptocurrencies demonstrates the growing confidence of investors in the market.

“Confidence [is] returning back to the market,” Zhu said, adding that more fiat holders could invest in crypto assets in the near-term. “I expect large caps to outperform. I also expect stale fiat-holders to chase as we grind higher.”

Last week, Zhu explained that nearly $6 billion is sitting on the sidelines within the crypto market waiting to be allocated to cryptocurrencies once the sentiment in the sector improves.

While the 5 percent surge in the price of Bitcoin did not lead to a break out of key resistance levels above the $4,200 mark, it sparked more optimism in the cryptocurrency market.

Throughout the past month, the commitment of two U.S. public pensions in Morgan Creek’s crypto fund and the $200 million+ investment by institutions in Grayscale’s digital asset fund led investors to become increasingly positive on the mid-term trend of the market.

As sentiment among investors recovers, the $6 billion worth of fiat in the cryptocurrency market could gradually come back into major assets like Bitcoin, fueling a recovery.

“There’s an estimated $2B in cash sitting at crypto funds/holdcos. There’s another $2B+ sitting in stablecoins, and another $2B sitting at exchanges/silver gate/signature.”

“This is $6B fiat already onboarded to crypto to buy your bags. Imagine thinking we need new money to hit $10k.”

As always, there is a possibility that the entire setup from $3,122 to $4,100 is a bull trap. In the upcoming days, it is crucial for Bitcoin to maintain its momentum and volume. 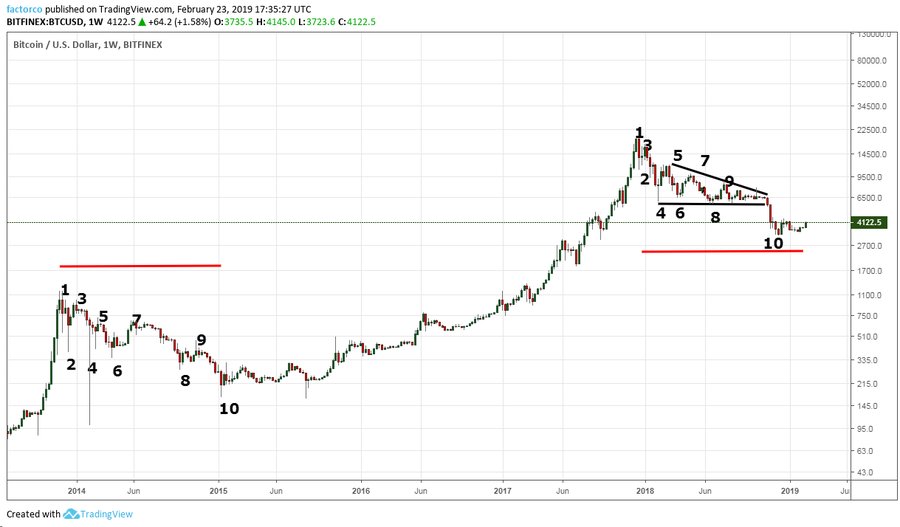 Since early January, the daily volume of Bitcoin has increased from around $4 billion to $8 billion, by nearly two-fold.

Previously, Mark Dow, a former International Monetary Fund (IMF) economist, said that for BTC to escape a vulnerable range, it will need to rebound to $5,000 to $6,000.

“Still a beautiful chart. If bitcoin can’t bounce to at least $5k – $6k soon, it’s a really bad sign for the cyberbulls. And if it breaks down thru the yellow line at any point, even the HODLers need to GTFO,” he said.

Hence, until BTC breaks out of $6,000, it is still vulnerable to a drop below key support levels.

In a sideways market or when Bitcoin demonstrates a decent increase in price, small market cap tokens often tend to record large gains against both BTC and the U.S. dollar.

Tokens representing blockchain projects that have seen significant progress in terms of development, adoption, and scaling have seen strong price movements in the past week.

Ontology, Qtum, ICON, Maker, and NEO have recorded gains in the range of 7 to 20 percent against the USD on the day, within hours. In the near-term, analysts foresee tokens and small market cap crypto assets continuing to demonstrate strong momentum as the volume of both the digital asset exchange and futures market improves significantly from current levels.