It’s interesting to note that this happens despite the fact that retail investors are yet nowhere to be found, according to data. It appears that the current rally is driven mostly by institutions. All of this takes place while the 2020 US Presidential Elections are still ongoing.

Of course, Bitcoin’s path is paved with dips along the way. The cryptocurrency regularly sheds a considerable amount of USD value, but, so far, it manages to recover and continue increasing. This has also pushed Bitcoin’s dominance over the entire market up to 64.7%, meaning that over the past seven days, it claimed more grounds compared to altcoins.

Speaking of altcoins, a lot of them are increasing as well. Over the past week, ETH, XRP, LINK, BNB, LTC, DOT, and so forth are all up sizeable amounts.

Throughout the past few days, while the elections have been taking place, almost all global markets see positive developments. 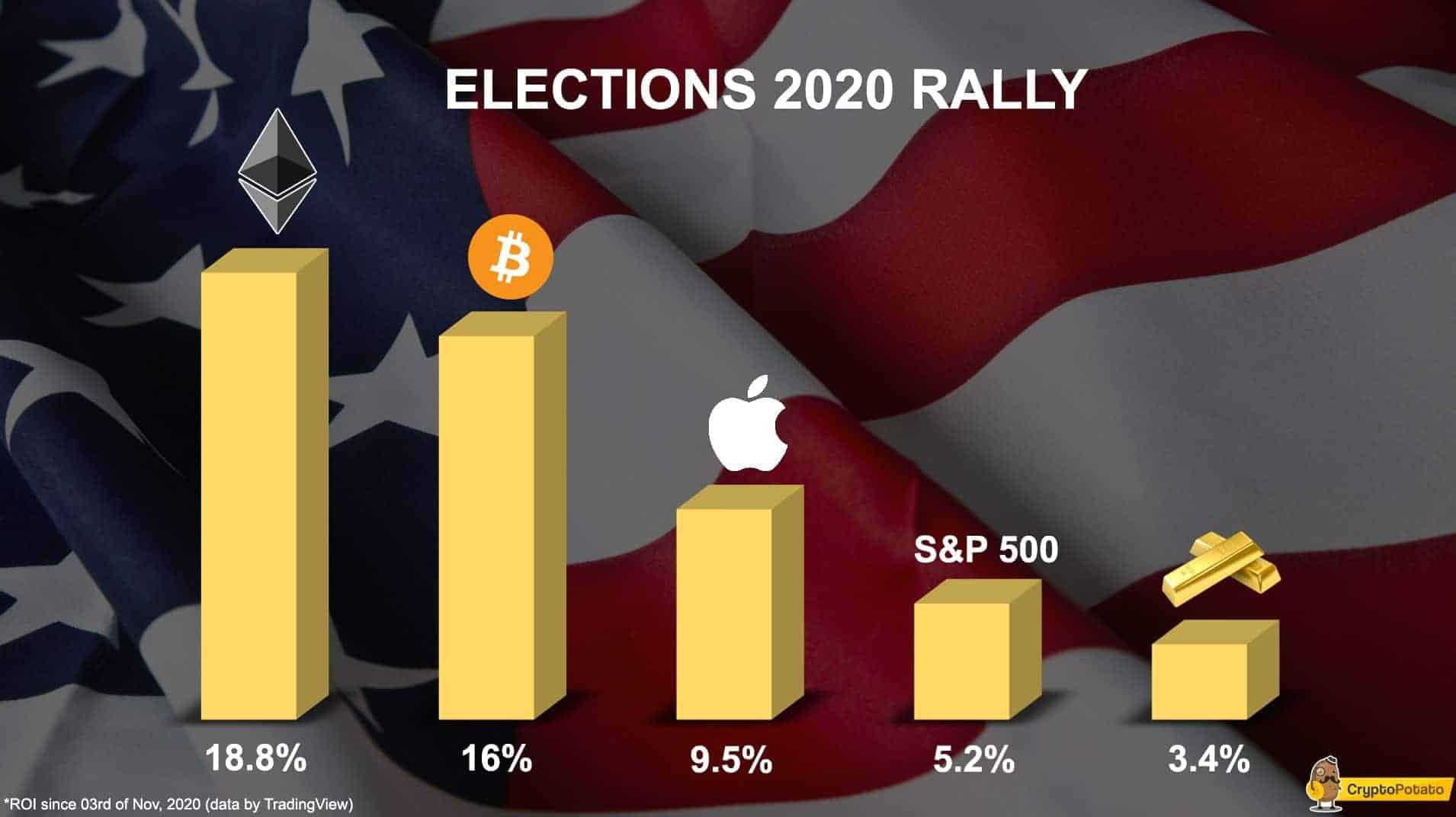 As seen in the above chart, stocks, as well as commodities in the face of gold, are also up since their lows on November 3rd. It remains unclear who the new president of the United States will be, though Joe Biden currently seems to have a big lead.

Elsewhere, in a massive piece of news, the United States Department of Justice (DOJ) is suing for the forfeiture of bitcoins worth over $1 billion. The funds allegedly belong to the infamous Silk Road dark market.

The US Elections had somewhat of a potentially nice impact on the industry as Cynthia Lummis, a long-term BTC hodler, has been named Wyoming’s new Senator.

In any case, the community is eagerly anticipating Bitcoin’s next move and predicting whether it will be a correction or a shot to its former all-time high of 20,000. Only time will tell.

The US DOJ Seizes Bitcoins Worth $1 Billion Allegedly Belonging to Silk Road. The Department of Justice of the United States is suing for the forfeiture of bitcoins worth over $1 billion that it seized this Thursday. This is by far the largest BTC seizure that the country has ever made.

Bitcoin Entered A Big Bull Market As It Crossed The Adoption Rubicon, Says Mike Novogratz. According to the popular Bitcoin permabull Michael Novogratz, the cryptocurrency has started its big bull market. That’s because it supposedly managed to cross its adoption “Rubicon.” He believes that more institutions will jump on the bandwagon.

The Associated Press Has Leveraged Ethereum For Recording US Election Data. One of the most recognizable news organizations in the entire world, The Associated Press, is leveraging Ethereum’s blockchain to record election data from the ongoing 2020 US Presidential elections.

Bitcoin In US Senate: New Wyoming Senator Bought BTC in 2013. Following the developments related to the 2020 US Presidential Elections, Wyoming has a new Senator – Cynthia Lummis. Interestingly enough, she is a long-term bitcoin hodler, and she bought her first BTC back in 2013.

Bitcoin Just Had the Second Largest Difficulty Adjustment in History. This week, Bitcoin went through its second-largest mining difficulty adjustment. The difficulty dropped by a whopping 16% a couple of days ago. Shortly after that, BTC started rallying hard and reached $16,000.

This week we have a chart analysis of Bitcoin, Ethereum, Ripple, Litecoin, and Cardano – click here for the full price analysis.

Disclaimer: Information found on CryptoPotato is those of writers quoted. It does not represent the opinions of CryptoPotato on whether to buy, sell, or hold any investments. You are advised to conduct your own research before making any investment decisions. Use provided information at your own risk. See Disclaimer for more information.
Categories: Charts, News
Tags: Bitcoin, blockchain, BTC, crypto, Ethereum, Novogratz, surging