March 20: the Bitcoin (BTC) price broke the $9,000 mark today after a rough start to the year in which the price decreased by nearly 70 percent from the December high of $20,000.

Following the December high the BTC price has moved downward in fits and starts. On January 17, BTC price was down to $9,724, less than half of where it had been a month previously when it scraped the underside of $20,000. The month of February started with BTC dipping below $9,000 for the first time since late Nov. 2017.

By February the price had sunk to just $5,922, with skeptics claiming that it could sink even lower. By late February and early March, BTC was fluctuating around the $9,000 mark, with changes spurred by news of new regulations on exchanges by the US Securities and Exchange Commission (SEC).

A return to prices above $9,000 would provide the confidence many traders and investors need for the BTC value to grow even further. 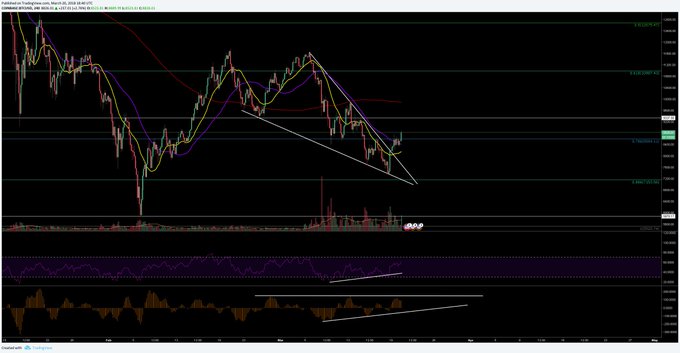 BTC/USD 4hr chart. Bulls have breached an important resistance: previous highs. Next real target is around $9,000. Do we have the buyers to get there? Going LIVE at 3EST.

As Cointelegraph reported March 20, the G20 decided not to crack down on cryptocurrency, and opted for a more moderate approach of simply classifying cryptocurrencies as assets. Some see this as a possible cause for crossing the $9,000 psychological threshold.

Bitcoin is edging toward $9,000 after the G-20 nations declined to call for a coordinated clampdown on the cryptocurrency market http://bloom.bg/2ptngtb

Others are more skeptical that the results will be long lasting, and see the most recent bump above $9,000 to be part of a holding pattern that requires another, stronger increase in order to break the barrier.

i) #btc retraced smaller than I would ever expect – only 23%

iii) it’ll be a journey to get there

iv) what worries me are the overbought positions. I’m waiting for a pullback