With Bitcoin shedding 50 percent of its value in little under a month, those firms who vocally rode the wave on the up are now feeling the terrify drop in terms of loss of their own market value.

Companies such as Overstock, which has some of its fortunes locked up in the digital currency, as well as Square Payments, which announced plans to allow for some Bitcoin buying and selling, have been hit hard by this crash.

While the numbers being tracked by these Bitcoin-backing firms are nothing compared to the actual losses being suffered by the cryptocurrencies, they are directly correlated.

Square showed a loss of five percent or $90 mln, this week as the company which is led by Twitter’s CEO Jack Dorsey ended with a value of $15.1 bln.

Overstock, a longtime supporter of Bitcoin going back to 2014, fell 11 percent ending with a value of $1.8 bln thanks to the roughly $200 mln loss.

This latest drop in the crypto market has been put down to the uncertainty emanating from Korea with their apparent bank of cryptocurrencies on the cards. This pressure from regulators also adds teeth to the fears in dealing with cryptocurrencies in major firms.

There are also instances where companies who have tried to jump on the Bitcoin and Blockchain bandwagon have found that the wagon is currently in the shop for repairs.

A number of firms have changed their focus, tact or simply their name, to profit from the hype and mania around cryptocurrencies. However, the other, ugly, side to this ecosystem is the violent volatility that needs to be stomached.

Kodak, perhaps better known for their cameras, fell eight percent. The company has announced plans to offer a cryptocurrency known as KodakCoin at the end of the month, initially sending shares up 60 percent on the day of the announcement.

Lessons up for grabs

While the future, as it always is, is uncertain for the crypto ecosystem, there are lessons to be learned in this latest Bitcoin ‘death.’ Bitcoin has been dead and buried countless times as its volatile nature is too much for some to take, sending them fleeing.

However, it has shown stronger and stronger resistance and ability to bounce back over the years and the crashes. Something that companies that are facing unprecedented dips will need to be aware of.

Bitcoin believer Max Keiser explains these movements in a graph he tweeted: 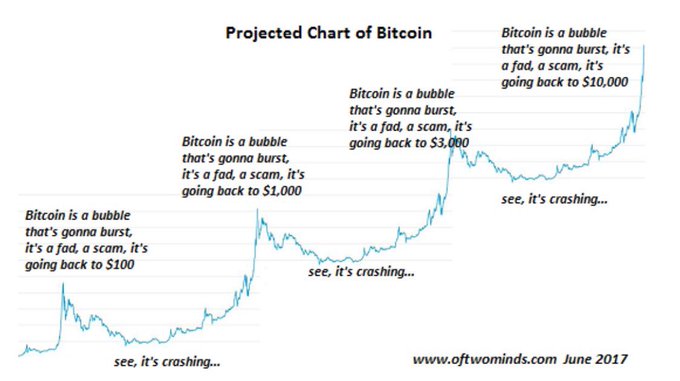 This pattern will repeat all the way to Bitcoin $100,000 and beyond