Volatility is a given in the Bitcoin market, but nowadays, it’s a given in every market. Let’s face it – 2020 hasn’t been a good year for a lot of things, least of all the financial markets. With stock markets hitting record-lows, inflation only likely to rise from here, and investors puzzled with all that’s happening, the volatility of 2020 has not helped anyone. However, what it has shown is that volatility is not just a facet of the crypto-markets, but every market out there. 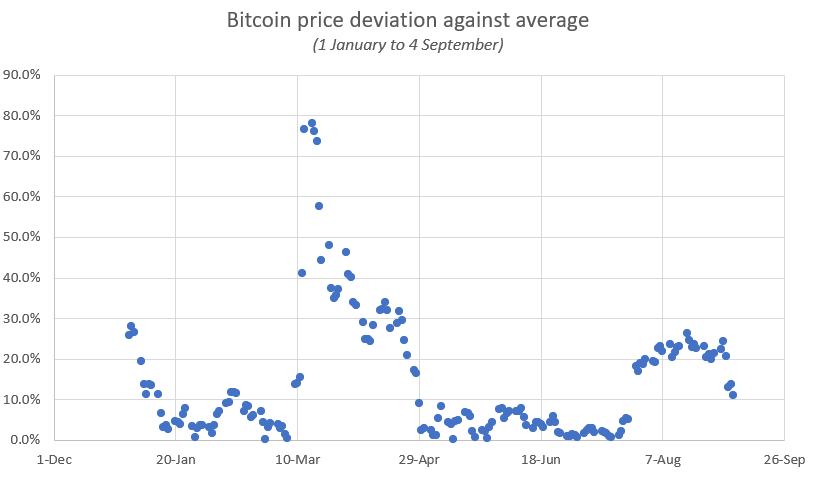 Looking at the deviation of the trading price against this fixed (and not moving) average, there was an average deviation of around $1,800 or 14.4 percent against the daily trading price of Bitcoin within the period range. Given above is the deviation of the daily price against the average of $9,064. The highest deviations were unsurprisingly in March, a month when the price crashed to below $4,000 and recovered over the next two months. There is a heavy concentration of deviation under 10 percent for April to June as the price traded sideways followed by a jump up over $10,000 in July.

Putting this in context of the current price emphasizes that the “bullish” swing we’re seeing is at least $1,200 over Bitcoin’s yearly average and it’s been this way for over two months now. BITCOIN 2020 so far: How has Bitcoin’s price fared?