Julius Baer announced today that it would offer crypto services to its clients all across the world.

Switzerland’s third-largest banking giant partnered with a Zug-based startup SEBA Crypto to take advantage of their institutional-grade digital assets solution. The bank said in a press release that the partnership with SEBA would allow them to offer its clients digital assets storage, transactions, and investment solutions.

The move came as another example of larger financial institutions integrating crypto assets to their platforms. Before Julius, Swiss-based Falcon Private Bank had also announced that it would enable its clients to store, trade and invest bitcoin and other similar crypto assets. In another instance, megabanks JPMorgan and Mizuho last week announced that they would launch its digital currencies for remittance and payment settlement.

Julius Baer is pleased to announce the collaboration with SEBA Crypto AG to provide its clients with access to a range of new digital asset services. https://www.juliusbaer.com/global/en/news-insights/news-insights-detail-page/item/julius-baer-enters-partnership-for-digital-asset-services-with-seba-crypto-ag/ … @WeAreSEBA

Peter Gerlach, Head Markets at Julius Baer, asserted that their group was convinced with digital assets’ long-term potential, predicting that they will become “a legitimate, sustainable asset class of an investor’s portfolio.” He added:

“The investment into SEBA as well as our strong partnership are proof of Julius Baer’s engagement in the area of digital assets and our dedication to [making] pioneering innovation available to the benefit of our clients.”

Julius’ announcement also brought SEBA under a new spotlight. The startup, launched by two former UBS executives, raised $103 million to build a crypto bank. At the time of the launch, SEBA had stated that it would offer cryptocurrency trading and corporate financing services to companies and investors alike, with a particular focus on ICO consultation.

“We are very proud to have Julius Baer as an investor. SEBA will enable easy and safe access to the crypto world in a fully regulated environment. The cooperation between SEBA and Julius Baer will undoubtedly create value for the mutual benefit and to the clients.”

The startup is now seeking banking and securities dealer license from Switzerland’s top regulator FINMA. According to Julius’ announcement, their partnership SEBA will come into effect once the latter receives regulatory approval. The bank also made a small investment into SEBA.

“SEBA wants to bridge the gap between traditional banking and the new world of crypto,” Buehler added.

Julius’ move into the cryptocurrency sector has further validated the speculations about institutions’ growing interest in cryptocurrencies. Following the 2018’s crash, in which the market lost one-third of its value, speculators rested their optimism on the potential investments from big financial players. While the market stays in what now is its most extended bearish cycle, the entry of players like Julis Baer, Bakkt, Nasdaq and Fidelity could improvise the buying sentiments. 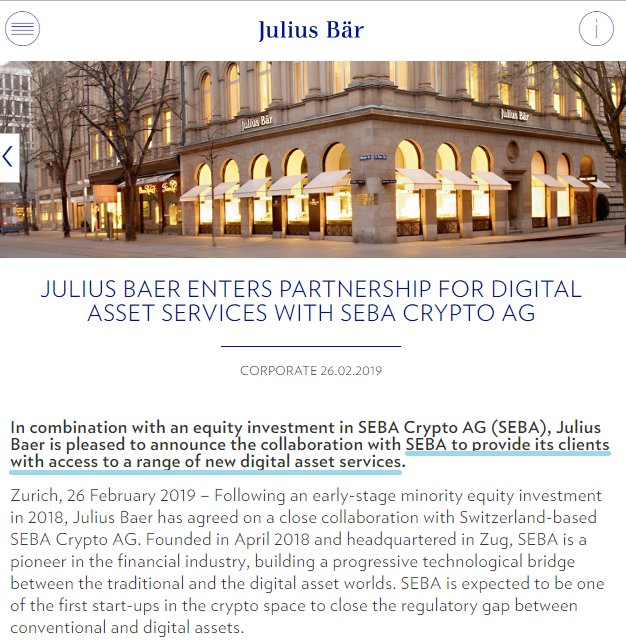 Julius Baer Group AG, one of the three largest private banks in Switzerland, is providing its clients access to crypto.

SEBA, which raised $103 million in Sept 2018 to build a crypto bank, is working with Julius Baer.

This is one interesting bear market, great for exposure.

At the time of this writing, the cryptocurrency market capitalization is $130.45 billion.