At the end of the 12th century, unexpectedly, Genghis Khan created the world’s largest empire, gaining control over the trade route “the Silk Road” which stretched across China to Eastern Europe. Secured under Mongolian leadership, during the Pax Mongolica period, the Silk Road was particularly safe from raiders as well as taxes, which stimulated free trade between China and the Mediterranean countries enabling political, economic stability to follow.

Recently the Russian President Vladimir Putin proposed a cyber-initiative grander in scale than Pax Mongolica after consulting with Ethereum co-founder Blockchain expert Vitalik Buterin and experts from fifteen other countries- including the US, India, Israel, Armenia and Turkey- about their Blockchain and cryptocurrency initiatives. Putin’s first of it’s kind cyber-initiative will connect some of the most promising emerging market economies stretching across Asia, Eastern Europe, Africa and South America, via Blockchain and smart contract technology by using a new multinational cryptocurrency to be collectively adopted by the BRICS and the Eurasian Economic Union (EEU) countries (Member States).

Member States, known for their tremendous economic growth potential, could hail this first of its kind cyber-initiative. As they have been reeling from the global credit crisis of 2007/2008, which hindered their economies. Federal rate increases augmented their mounting debt burdens and falling global commodity prices stymied their export led growth. The cyber-initiative could reshape Member State economies, by spurring technological innovation for income growth and economic prosperity. 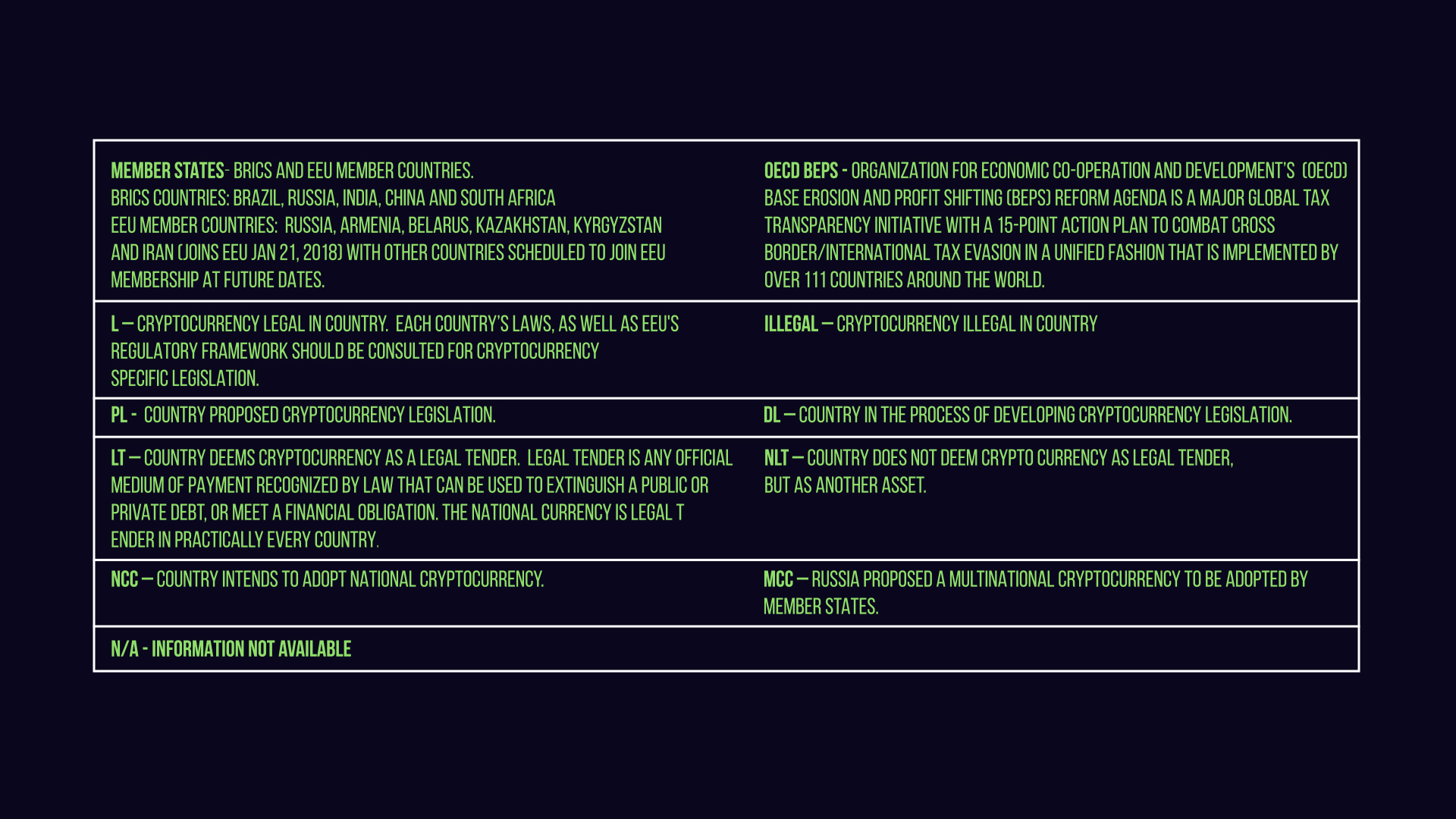 As reported by Russian media source RT, days before the end of 2017, the Central Bank of Russia, proposed to create the first joint multinational cryptocurrency for BRICS and EEU countries. By jointly adopting a new cryptocurrency, the Member States could increase their investments in Blockchain, smart contract technology pushing towards creating cashless societies and improve managing their liquidities with substantial support from the New Development Bank.

Many economists, veteran bankers and traditional financial institutions have sought to downplay the influence of cryptocurrencies in the overall world economy, such as the German insurance giant Allianz Chief Economic Advisor Mohamed El-Erian who said: ‘‘Bitcoin’s price will explode, but mass adoption is not going to happen.”

But if adopted and implemented, the first multinational cryptocurrency could be used by more than 41 percent of the world’s population. It could potentially improve trade efficiency among the Member States by replacing other fiat currencies used in trade settlements. And it could create a technologically resourceful trade block that could reshape global trade via Blockchain and smart contract technology.

Based on instructions from President Vladimir Putin, Russia’s central bank and finance ministry jointly prepared a bill for the regulation of сryptocurrencies and ICOs which was submitted to the Duma for approval on Dec. 28, 2017. The bill is expected to be adopted in March and finalized by July 1, 2018.

The bill characterizes cryptocurrency, including ICO tokens not as legal tender but as “other property.”

The bill allows for ICOs but establishes restrictions on them. Those who are not qualified investors will be able to purchase tokens of a certain type for an amount not exceeding 50 thousand Rubles ($869). The ministry also suggests limiting the maximum amount of funds raised by an ICO to one bln Rubles ($17.4 mln). Although the President of the Russian Association of cryptocurrency and Blockchain (RABIC), Yuri Pripachkin, argued: “ICO fundraising should not be limited as they can attract an unlimited amount of foreign investments to Russian projects.”

Taxation of cryptocurrency mining and trading

Cryptocurrency trading would not be subject to a value-added tax (VAT).

Member States, with the exception of Armenia, Belarus, Iran and Kyrgyzstan adhere to OECD BEPS action plan. It is not clear whether Member States will follow an approach similar to the EU in formulating an appropriate transnational tax policy for their new multinational сryptocurrency transactions.