If you haven’t heard of Ripple (XRP) already, now is a good time to get to know the digital currency. Though still low key, Ripple has huge potential and could soon rival Bitcoin.

So what exactly is Ripple?

Ripple uses blockchain and distributed ledger technology. It is a global settlement network. In order to make a settlement, a fee must be paid in XRP and these are what trade on cryptocurrency markets. 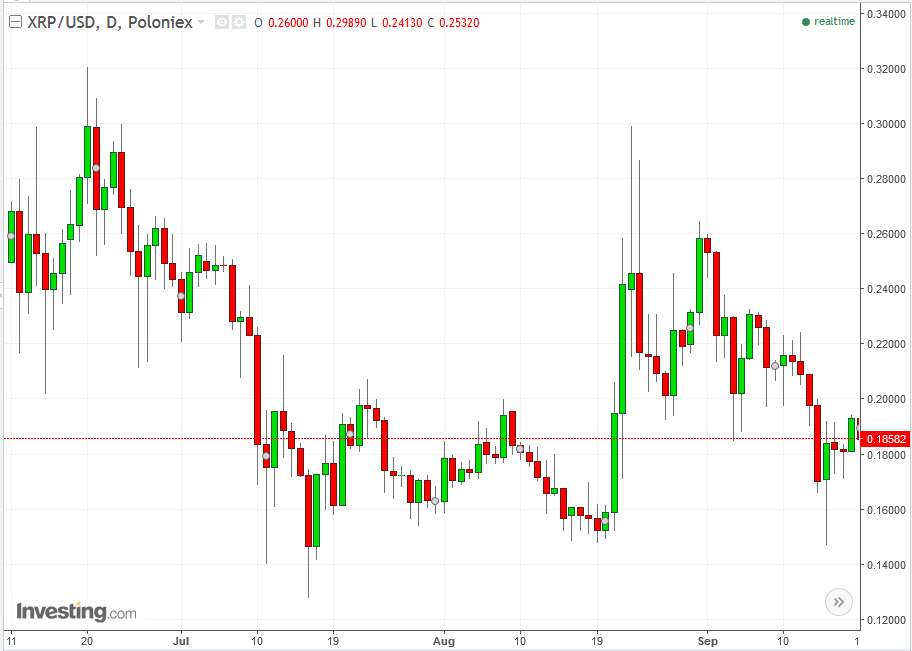 Ripple aims to provide a “frictionless experience” to send money globally using the power of blockchain. Ripple has also been adopted by a number of banks including Spain’s BBVA (MC:BBVA), Royal Bank Of Canada (NYSE:RY), Bank of America (NYSE:BAC) and Standard Chartered (LON:STAN). Indeed, buzz about Ripple indicates it could have the potential to revolutionize the financial services sector.

Currently Ripple is considered to be the third most popular cryptocurrency after Bitcoin and Ethereum. At the time of writing, XRP was trading at $0.186. The currency has a market cap of almost $9 billion, after starting the year with a valuation around $250 million.

Jeremy Epstein advisor to OpenBazaar, IOTA and ZcashRipple explains he has been a fan of XRP ever since he read the Ripple whitepaper fifteen months ago.

“I was excited about Ripple. I think their focus on a specific use case and being the common overlay for the global banking system of settlements is spot on. The effort to make XRP a de facto settlement coin is strategic brilliance.“

“At the same time, as banks continue to mobilize on the blockchain front, they have an existential threat in the form of industry consortia that, sensing Ripple’s potential dominant role, will respond in kind. The good news for Ripple is that consortia have a poor track record, so I like their chances.”

Another huge fan of Ripple is David Drake, the chairman of wealth preservation firm LDJ Capital. Drake is also enthusiastic about Ripple. “A lot of people in the beginning question Ripple but now when they are doing the second round of fundraising for Ripple Labs I expect a larger valuation. It is not inconceivable that this may simulate the trajectory of something like Uber down the road.” he says.

Another cryptocurrency commentator said there is “no hype” concerning Ripple. Xavier Hawk, founder of Permacredits and Phireon notes:

”While some other currencies have bravado and hype, Ripple has revenue, clients, and a strong position in the market.”

Hawk describes Ripple as the “quiet turtle plugging away with its eyes squarely set on the right prize which is revenue”.

“Ripple is establishing itself as a solid organization with its priorities set straight. Since the beginning of its inception in the market it has gone after the right clients, built the right networks, and provided value to the banking world behind the scenes irrespective of all the hype in cryptocurrencies.”

“Ripple has immense potential. Ripple has a unique market position compared to other currencies. It has been getting stronger in the market over the last few years.”

“It’s in a great position working with banks and can expand into other products or services and that’s where it has strength over others. These partnerships will allow Ripple to continue to expand and become more valuable.” adds Przeorski.

As more and more investors and financial institutions gain understanding of the latest wave of digital assets, Ripple will undoubtedly see increased interest.

Is Ripple Poised To Disrupt Bitcoin?